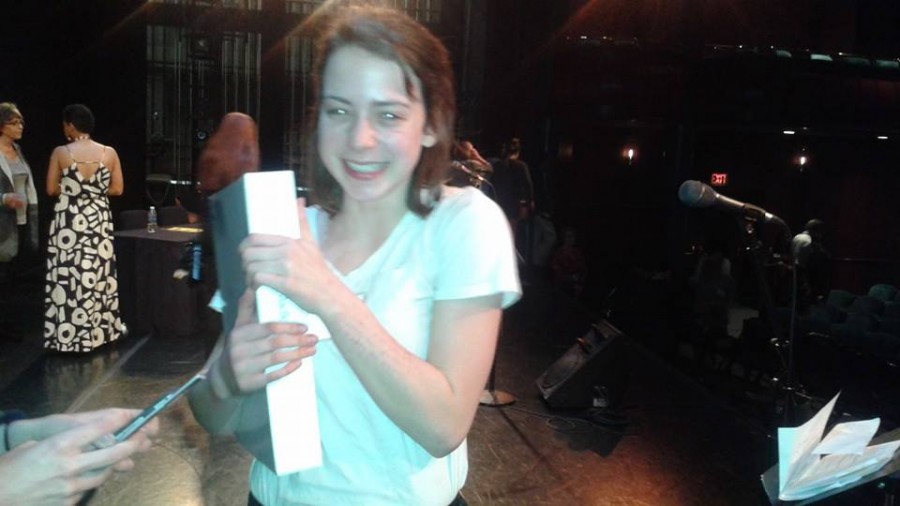 Frost cries tears of joys and hangs out tight to her prize –– a free macbook pro –– after winning the city Verselandia competition. Christine Coffelt Frost photo.

The fourth annual Verselandia, held at the Cleveland library April 2, was a night of emotions, laughter, and support. The crowd went crazy when it was announced that senior Maiya Coleman was named the winner.

Coleman, who remembered and recited both of her poems by memory, carried herself with a professional demeanor. She will be joined by Gwen Frost at the citywide Verselandia competition on April 20 at the Newmark Theater in downtown Portland. Pocket Patino, who took third, is an alternate.

A total of 12 contestants made up the field, and after an initial round, the judges — Principal Paul Cook, Special Projects Coordinator Jan Watt, Counselor Anthony Scribner and X.K. Austin, a Da Vinci Middle School teacher — chose seven finalists to read a second poem.

The audience, warmed up with a comical poem by teacher Vanessa Hughes on the stress of a student dropping her class, was mostly made up of parents that came to support their kids, and competitors’ friends, and staff that were involved with Verselandia.

There were extraordinary poems shared by each  participant. The most memorable poems and performances of the night were, in no particular order: senior Owen Netzer’s beautiful poem about finding love; sophomore Alyssa Hadley’s emotional writing about her deceased grandma; freshmen Adam Nayak and Patino’s exceptional writing skills at such a young age; Cass Fristoe’s poem about the power of music; Abbey Winn’s powerful and heartbreaking poem about sexual abuse; and sophomore Zawadi Doti’s pride in being African and her struggles to adapt to a new culture and language.

Special mention needs to go to Kendall Marlia, who has been a Verselandia contestant for all four years, and is thankful for the program and the friends he has made through it.

Seven of the 12 contestants moved on to the second round: Winn, Patino, Marlia, Frost, Darby Gillis , Doti, and Coleman. In this round the contestant brought everything they could. They impressed/shocked the audience, as well as myself, with their abilities to write poetry. Coleman put so much emotion and dedication into her poems that led to her victory, as well as Frost. They both wrote in- depth poems that captivated the audience’s attention.

The judges were harsh when giving their scores, making the crowd boo them, yet sometimes applaud them for their precise scores. Each contestant is an incredible writer, if it were not so, they would’ve never made it to the second round. All contestants should be proud and happy with what they have all accomplished as well as their parents towards them. If it were me up there, a single word would have never come out.

Once round two was over host Eric Levine, an English teacher, read poems to entertain the audience while the judges tallied up the scores to determine the third, second, and first. He even sung hilarious songs while playing his guitar. The audience was entertained as well as the judges who shook their heads at some of the lyrics sung by Levine.

To all the performers great job, and good luck to Coleman and Frost at the district’s competition.

Editor’s Note: Frost was crowned city champion at the city slam poetry competition, held Apr. 20 after the print edition of The Clarion had gone to bed.