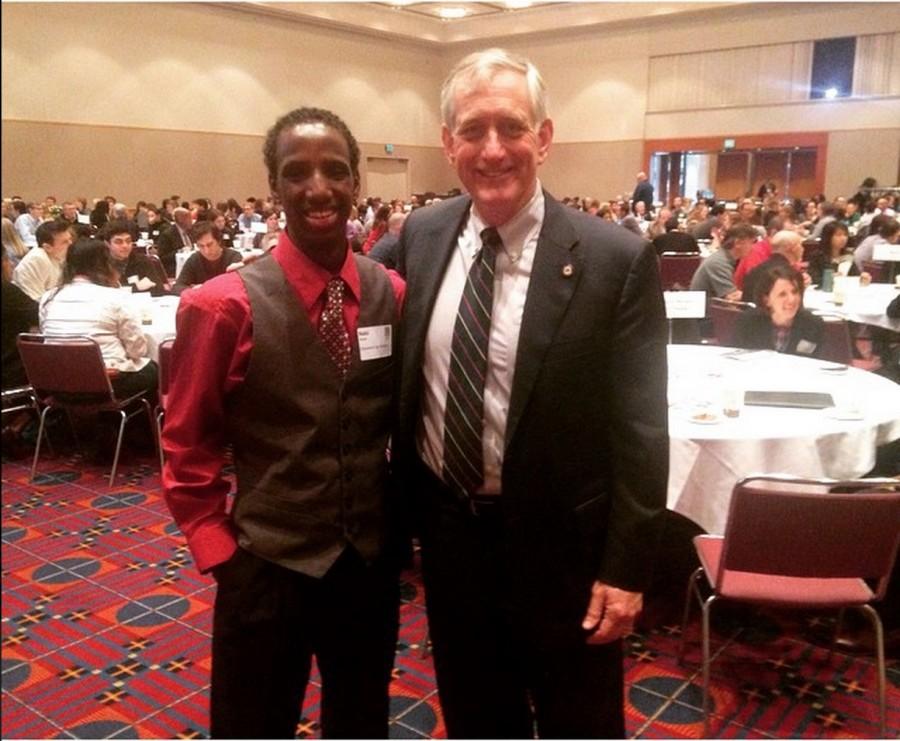 Nabi Amin with Mayor Charlie Hales at the career expo, in a photo from Amin's instagram.

Nearly 6,000 high school students from all over Portland took advantage of an opportunity to have a career learning experience at the Oregon Convention Center on March 17. Students connected with employers, both local and national, to participate in hands-on activities and learn more about fields of work that they might be interested in.

The Portland Workforce Alliance, a nonprofit organization, puts on the Northwest Youth Careers Expo annually at the Convention Center, which is by far their biggest event of the year. They bring more than 100 exhibitors to represent different industries and career fields and give students an opportunity to explore what they are interested in. The expo is heavily focused on hands-on activities, and exhibitors like the Portland fire department and construction companies had students welding, painting, and drilling at their booths to give them a taste of what kind of skills are needed for their various careers. Other companies like Nike and Microsoft also had booths at the expo, having sock giveaways and showcasing things like 3D printers. All of the exhibitors were tasked with answering students’ questions about various industries and giving them insight into how to break into the workforce and area of their choice.

Heidi Sause, Cleveland’s Career Coordinator, oversaw the school’s participation in the event and organized transportation to the Convention Center. She says that the event is an efficient way to get students thinking about their post-high school careers, and also an opportunity to check off one of their graduation requirements: the Career Related Learning Experience (CRLE).

Every PPS high school sends students to the event as a part of career exploration in the district, and this year Cleveland had 153 students attend. Most of them were sophomores, particularly because they are recruited to come on the field trip through their health class. Students were transported downtown on five buses during lunch and were at the expo for an hour and a half.

A total of 5,800 students attended the event, and more than 1,000 mock interviews were held by volunteers to help students prepare for job interviews and help them develop the skills they will need to make it go smoothly.

Sause wanted to make sure that students only went to the expo if they thought it was going to be valuable to them, and not take up a spot that could be going to someone who really wanted to attend. According to her, if the trip was made mandatory, students would be more likely to skip or try to get out of it rather than taking advantage of the opportunity.

A separate but related event called the Expo Breakfast takes place before the Career Expo, and it is a showcase event put on by the Portland Workforce Alliance to recruit new people and businesses to partner with them in providing career learning resources for students at events like the Career Expo. Three Cleveland students attended this event this year: Justin Kwong, Kenny Thai, and Nabi Amin. Oregon Governor Kate Brown and Portland Mayor Charlie Hales both spoke at the breakfast, as well as PPS Superintendent Carole Smith, and Amin had the privilege of introducing the mayor before his speech, as well as interview him the week before.

Sause talked about the idea of equity in education, and making sure that all students have an equal opportunity and access to resources regardless of demographic. She said the Career Expo is an example of a unified effort to remove the obstacles that block some less privileged students from taking advantage of resource opportunities, primarily the obstacle of transportation. “Because the district provides transportation [to the Expo] and it’s the only event that the district provides transportation to, that removes a whole challenge that a lot of our students face,” she said.

Sause also emphasized the importance of the group of attending students being diverse, and not having only one group of students attending the same events over and over again.

“Events like the Expo tend to be attended by a group of students that is representative of our student body as a whole,” said Sause. “That’s what we want to see. We want to see everybody having access to these type of opportunities. That’s what makes it one of my favorite trips.”