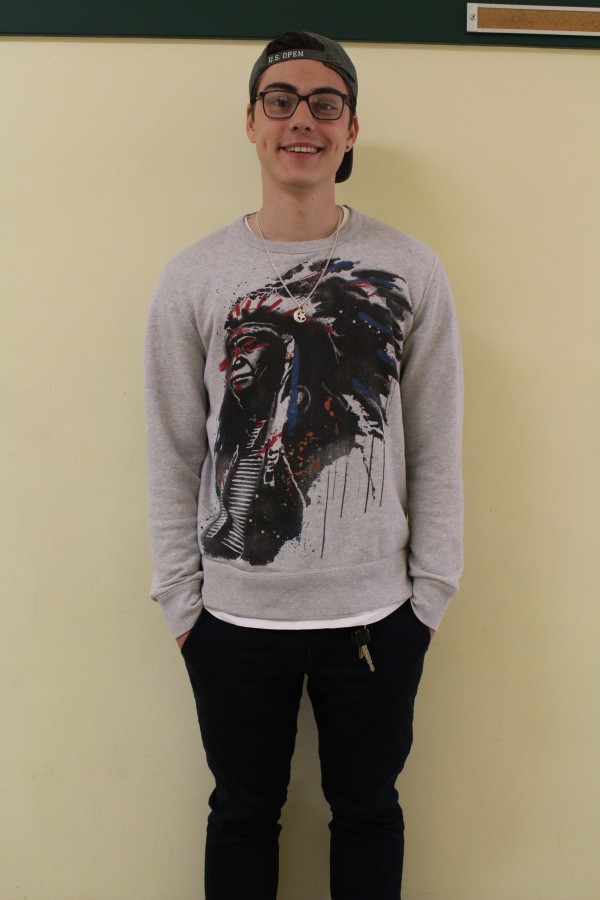 “’There was a knock on the door, we opened it, and five armed men stormed in. They locked us in the bathroom, told us everything will be ok, and supposedly went to talk business with your aunt and uncle,’ my mom stops to take a breath. ‘Little did we know the next time we see them, their heads will be detached from their bodies in a pool of blood laying on the front porch… .’”

“This is usually where my mom stops talking, because she chokes up and the tears begin to run,” senior Tarik Ibisevic discusses how his mother talks about her history as we sit on the floor in senior hall. Ibisevic has been a practicing Muslim his whole life, and moved to Portland when he was six-and-a-half years old, at which time he had lived in Germany prior. His family is from Bosnia i Herzegovina, and his family evacuated the country due to the Bosnian genocide that occurred during his parents’ lifetime. Two of his uncles, an aunt, four cousins, a grandpa, and hundreds of family friends were part of the 100,000 people murdered in the Bosnian genocide.

In 1992, the government of the Yugoslav republic of Bosnia-Herzegovina declared its independence from Yugoslavia. Over the next several years, Bosnian Serb forces, and the Serb-dominated Yugoslav army, targeted both Bosnian Muslims as well as Croatian civilians, resulting in the deaths of some 100,000 people (80 percent Bosniak) by 1995. It is historically regarded by some as the worst act of genocide since the Nazi regime killed roughly six million jews in the Holocaust. His parents immigrated from their home country to the U.S. for fear of their very lives, and fear that their fate might be that of their family members.

Ibisevic said, “This dislocation, of course, created economic hardship. I have watched my parents claw and scratch to get food on the table. My parents had to give up a life that they worked so hard for so that I can have a life. They had to throw all of it away when they came to the United States, because if they stayed, we all would have been most likely murdered like the other 100,000.”

Growing up in the United States as a practicing Muslim, while also being something dubbed as “white-passing” (meaning regardless of actual heritage, you can pass for a caucasian person,) came with its own set of problems for Ibisevic. The war on terror, the 9/11 attacks, and ISIS have contributed to a growing Islamophobia in the states.

“People often are shocked when they find out I am a practicing Muslim and treat it as kind of a disorder. It’s like, ‘What’s wrong with this kid; he’s white–how can he be Muslim?’ and I have been in situations where parents have told their kids they can’t kick it with me because I am a Muslim.”

In 2010, eight percent of the American population was Muslim, so it’s not surprising that Ibisevic generally felt singled out when he brings up his Islamic view on different subjects. Ibisevic notes how people perceive Muslims varies between open minded people, and people who are ignorant about Islamic beliefs and morals, which sometimes coincides with geography. Typically, Western media portrays Muslims as radical terrorists, which Ibisevic says is angering because he believes that “as a Muslim, I am practicing a religion that believes in peace and happiness.”

Ibisevic has visited Bosnia three times since his family has moved, but he says it gets tougher each time. “It’s tough to go down there and see a place that, in my parents’ memory, is described as such a beautiful place–and now you can clearly see the devastation from war.” At home, Ibisevic and his family speak Bosnian, which is his first language.

Ibisevic prays everyday, which, though he admits is a large obligation, it allows him “to come in contact with Allah multiple times every single day.” He still has a very healthy social life, contrasting to what some may expect from someone who practices a devout religion. “People think Islam is a super strict religion, and that it causes conflicts between balancing life and religion, but that’s not true at all.”

In the obstacles he has faced while pursuing his faith, Tarik said, ”We all face challenges in life and ultimately, they are what make you strong. I have many times questioned my devotion to my faith because of ridicule I have received while pursuing it. I have learned that people are going to make it hard for me to be who I want to be. But in the end, who I am and who I become is up to me, and not them.”