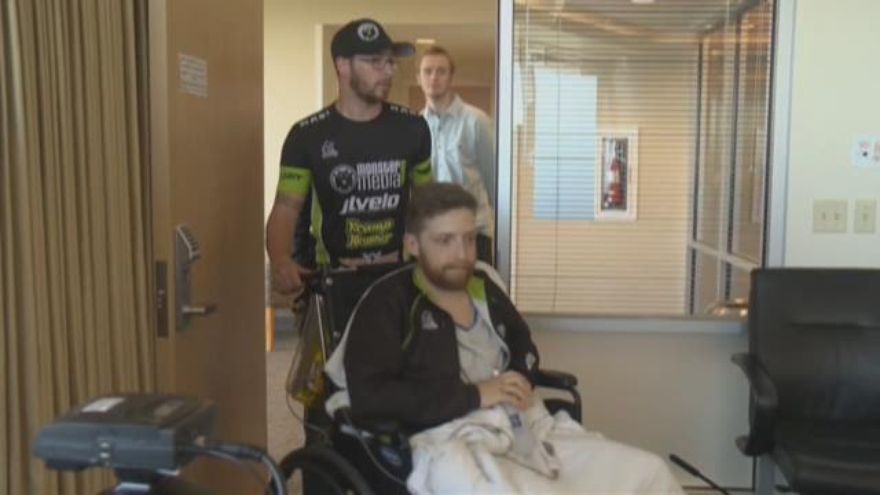 Alistair Corkett is discharged from OHSU after recovering from the crash. KGW photo

By David Rappe and Oscar Duyck

On Sunday, May 10, a man’s leg was severed. The cause of this was a brutal bike accident on the intersection of 26th and Powell, right outside Cleveland. The man, Alistair Corkett, was biking across the intersection when he was struck and injured by the rear fender of a truck, sparking dozens of protesters to take to the streets in outrage a day later. The protest has revived a long-standing debate about what best to do with Powell to keep it safe.

According to the Portland Bureau of Transportation, there have been 73 accidents from 2004 to 2013 on 26th and Powell alone. Of those 73 accidents, eight of them have involved bicycles and five have involved pedestrians. Powell is also a highway and a high traffic area and one of the city’s “high crash corridors.” Is the intersection too dangerous to be left unchanged?

According to Vice Principal Katy Wagner-West, there is not much the school can do about the intersection. “[The] school doesn’t have a say,” she said. However, Wagner-West does advise students to only use the crosswalk when crossing the street and wearing a helmet if you are commuting to school via bicycle. The school is “extra aware” of the intersection, she said.

One side of the argument is that yes, it is too dangerous to be left unchanged. The number of accidents in nine years is too big a number to ignore, and the severity of this most recent accident definitely begs an answer to our overlying question. Many students voiced their concerns on the subject of the intersection in question.

Destiny Beaver, a sophomore and a protester, wants change “so people won’t lose their legs and die.” The evidence and general opinion of how dangerous this intersection really is seems overwhelming. It’s almost as if we shouldn’t be focusing on whether it needs change so much as how to change it.

However, on the other side of the argument, we have some more basic concerns. For one, changing an entire intersection is difficult, especially since both Powell and 26th are relatively major streets. The issue seems to be trying to balance the high rate of travel on Powell with the need to slow traffic down near a school zone, all the while keeping the area safe for bikers who use 26th as a major crossing route of travel.

Calvin Burke, a sophomore, stressed that awareness is important. There is also the concern of money. To change such a major intersection so drastically is a task that would require an immense amount of money, seeing as how you’d have to physically move the crosswalks and sidewalk ends. The project would also slow down traffic for a good, long while, and on such major streets, this could be a huge hassle for commuters, who already experience slow downs on the main thoroughfare.