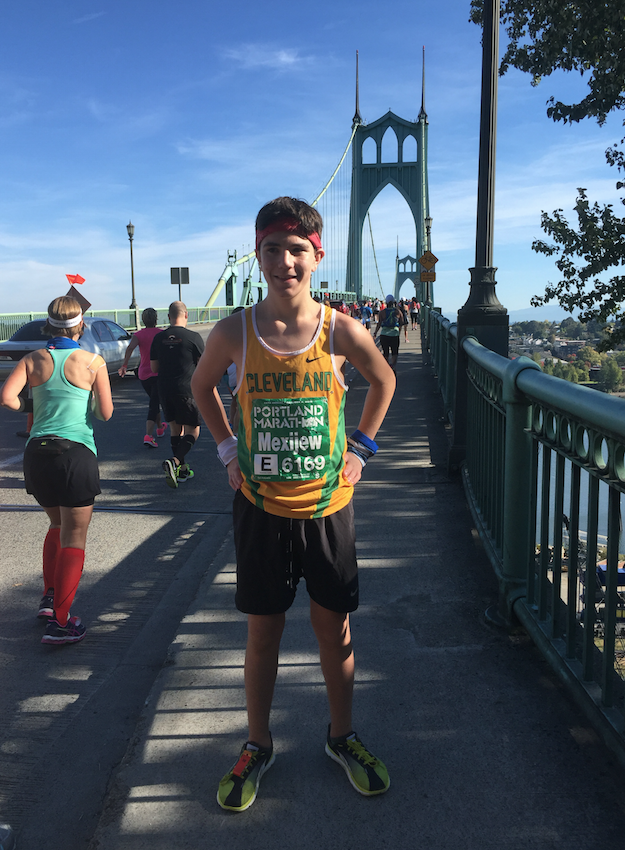 Avi Halperin stopping for the paparazzi during the Portland Marathon. Nangel Hofmann's photo.

Avi Halperin, a student of our very own Cleveland High School, was a finisher in the Portland Marathon on Oct. 4. He finished in a speedy 5:30:19 and already can see more marathons in his future as he tests his endurance one step at a time.

What inspired you to run a marathon?

The fact that my mom had run a lot of them and that I wanted to challenge myself with something that seemed so impossible. I’ve done a few half marathons but a full marathon was something completely different.

How did you prepare yourself?

I trained for a few months. I got up to 20 miles in my longest training run but I think I could have gotten up to more… We finished the marathon in our expected time, which was about 5 and a half hours.

How was the marathon itself?

It was fun but in like a weird kinda twisted way. It was scary in some ways but overall it was a really great experience, something I never thought I would actually be able to do. It was cool to be able to see my teammates cheering me on.

What helped you get through it?

Just the fact of knowing that it was something that so many other people were doing and I’m not the only one whose first time it is. Also that I had someone with me, running it, making sure that I was ok really helped.

Where was a challenge?

One of the biggest challenges during the Portland Marathon is around mile 15ish, there starts this area where it is really boring and there is no one there…That’s really hard mentally. In pretty much any marathon, you run mile 22, 23 and you ‘hit the wall’ which is the point where you just feel dead.

How was your body affected the next few days?

I was really tired and my legs were really sore…for a couple days it’s hard [to go about normal life], especially going up and down the stairs, going down is really painful.

I’m probably gonna do it again and the only thing I would really change would be reaching more miles during the training, getting up to at least 26 miles which now I know that I can do.

What did you learn from it?

What does someone need in order to run a marathon?

What is some advice for anyone out there that is planning on crushing this great endeavor?

When you’re at the point where you have already decided you are going to do it, just make sure that you train enough so that you can at least get to 20 miles because that is a point when things change. Make sure you are aware of the fact that there’s no shame in doing it slow, the main goal is to finish.