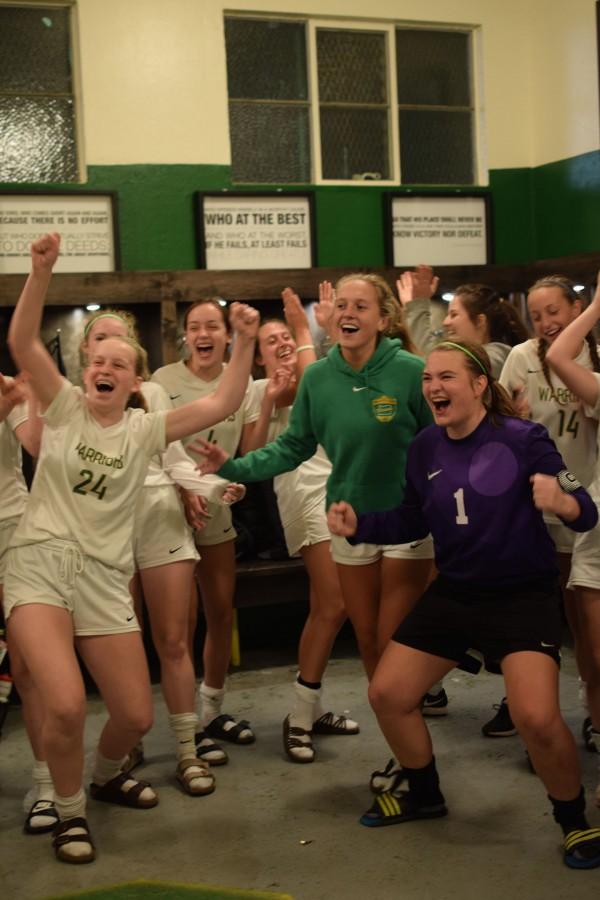 The Warriors’ remarkable season and playoff run ended Nov. 4 in the second round of the 6A playoffs to Sherwood, allowing the team to reflect on its league title, the first ever since the PIL was reformed last year.
The team finished with a 12-4-1, 6-0-1 in league. The last time they won league was in 5A in 2013. Last year, all PIL schools competed in the 6A division, including Grant, which won the 6A league title in 2014. “Grant was definitely a big threat for us this year, so it was huge after we competed in that game [with a 0-0 tie],” said junior Allison MacMillan.
The league title was still in question after the Grant game, and the Warriors had to beat Roosevelt and Wilson in their final two games. They took care of Roosevelt 6-0, and set themselves up for a big match against Wilson.
In 2014, Cleveland had a chance to win the title, with four of the top teams in PIL with identical records, but in their final league game against Wilson, they fell short, tying 2-2. This put all the more pressure on the team as they went into their final league game, once again against Wilson.
However, the team had no problem this year. Both junior Libby Cross and sophomore Lauryn Ruegg scored two goals, giving the team a quick lead against Wilson. It was a huge moment for the girls, because it was such a big goal for them throughout the season. The girls ended league with the best win record in PIL and took the number one spot from the PIL for the playoffs.
“At the beginning of the season, the team and us coaches collaborated on goals we wanted to achieve this season. Our biggest one is we want to win league,” said assistant coach Emily Ngan.
Tensions were running high before the big game against Wilson, but it was a night of celebration (even before the big win). Seniors Emily Diamond, Abby Diller, and CeAnn Romanaggi were celebrating their last league game of their high school career, and were satisfied with their win.
The 4-1 win against Wilson helped boost the Warriors’ ranking up to number 13 in 6A state.
Shortly following their league game, the Warriors were matched against the Beaverton Beavers for their first round playoff game. The Beavers were ranked number 20 in state. Because of the Warriors’ higher seed, the Cleveland stadium was the location of the game. A good crowd of students gathered on the rainy morning of Halloween to support the Warriors as they went up against the Beavers. Sophomore Ella Burke scored early on for the Warriors with nine minutes left in the first half. The Warriors kept this lead the entire game, with senior goalie Abby Diller turning away every attempt the Beavers made at a goal. “That was probably my best performance all season,” said Diller. The Warriors dominated the game and with a 1-0 win, moved forward to second round against number four-ranked Sherwood.
Although not getting the results they wanted with a 3-0 loss against Sherwood, the Warriors battled. MacMillan added, “We played really well together, and I was proud of us.”
Sherwood is a good team, and the Warriors went into it expecting a good game and came out of it proud of what they had achieved.
“I’m proud with how much effort everyone has put in to be able to be as cohesive as we are and be the strong team that we are,” said Diller.
The Warriors ended a great and rewarding season playing their best and are excited for the seasons to come.