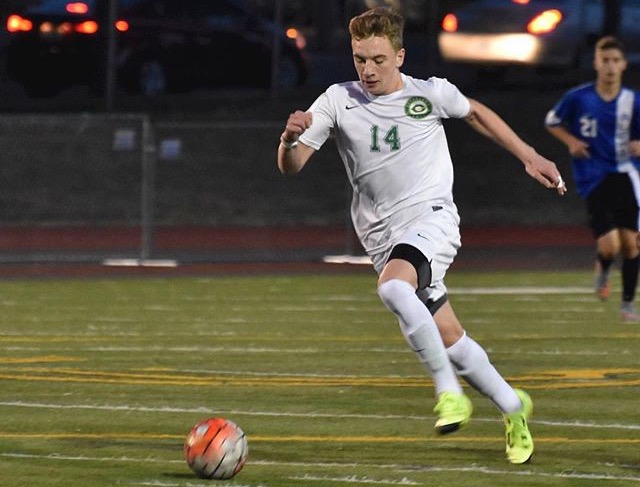 The soccer season drew to a close after the boys lost an inconceivably close game against Jesuit, 3-2. They now have to say goodbye to their seven seniors: Noah Christen, Shane Kirkpatrick, Janik Karoly, Julian Lusardi, Jorge Flores, Evan Andrews, and Stellan Roberts.

On the spooky day of Halloween, stormy conditions struck Jesuit’s field and the entirety of Portland. The boys entered the field at 2 p.m. in the pounding rain and proceeded to play their hearts out. Jesuit formed the first goal of the game in the 17th minute. Enzo Czysz sent a rocket from the top of the 18-yard box that slipped past Christen’s fingers. Cleveland’s Peter Gregory responded in the 29th minute, making a goal for Cleveland. Jesuit led 2-1 at the half. “My mentality was: beat Jesuit,” said Flores.

With 11 minutes left in the game, Cleveland took a free kick from 25 yards out. It bounced around until safely finding its place in the net. It was 2-2 when time ran out and the Warriors had lost Peter Gregory to a red card. They went into overtime one man down. Four minutes in, Jesuit found their way past the defense and around Christen to the goal and finished the ball, ending Cleveland’s season.

Karoly said, “It was tough because we were so close, but I’m happy with the way we played, I just wish we could have come away with a win.”

Jesuit moved on to play South Salem who beat the Warriors 2-4 in the pre-season.

The boys finished the season with an overall record of 5-7-3 and a league record of 4-1-2. They were 22nd in the state, making a huge improvement from earlier in the season. In the words of senior Janik Karoly, “As we played more, we got better together.”

Boys soccer earned their spot on the podium, capturing third in PIL. This did not come easy. They began the season with a rough start going into the league games with a 1-5-1 record. Coach Scott Killen reported, “We were able to weather a very difficult preseason…into a dangerous and plucky group [of boys] who scored timely goals, defended well and ground out results even when things looked dire.”

The team changed up their formation and adjusted logistics to best fit the players. It allowed them to see and play clearly. “We got the feel for the ball,” said Flores. “We started passing more and we got our shape.”

They began to play as a team, understanding the mechanics of cohesion. “We started caring how we did versus individually how each person did,” Roberts explained. “We were able to go forward together.”

There are bright things ahead for the Warriors. As coach Killen put it, “Young stars Loic Baures and Paiten Gibbons” show great potential in the years to come. The team is excited to work hard, play hard and come out on top. “I hope to next year challenge for the city title and finish in the top two in the league, as well as finish the season with a home field advantage going into the playoffs, which would likely be a state ranking in the top 10,” said Killen as he looks into the future.