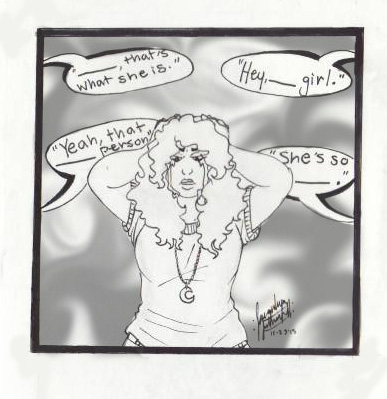 Silent bullying an issue at Cleveland

Walk through the halls of Cleveland, and little physical bullying will be apparent; no one is throwing punches, shoving others into lockers, or abusing others. Listen in on many conversations, and there is a small amount of evident mental bullying; most people treat others respectfully and kindly. However, there is bullying that occurs at Cleveland, one that is hard to detect and usually unintentional. Darryl Miles, vice principal, terms it “silent bullying.”

Silent bullying, also known as micro aggression, is often inadvertent and not identified as bullying. As stated by Psychology Today, the definition of micro aggression is “an indirect or subtle incident of discrimination against socially marginalized groups,” but Miles says it can extend past race, gender, and sexual orientation.

“It is where someone makes an aggressive statement but in a passive way… An example is when people identify physical appearance as a means of calling someone’s attention, whether it’s positive or negative,” Miles said.

Miles explains that it can be called silent bullying because, in many cases, students feel like they are the only ones who interpret the comment or action in a negative way. A person may not have intended to hurt someone’s feelings, but it was received in an upsetting way.

“A lot of times, kids don’t intend to be mean about it but they do it in a jokey way or so often that it becomes annoying to other people,” Miles said. “If someone says, ‘You have such pretty hair,’ most people would perceive it as a compliment. But in some cases, it is disliked by the recipient if the person repeatedly says that to them…someone could use that as a covert way of talking about another person.”

Recently, numerous students have talked to Miles about being victim to this type of bullying. Since this manner of bullying is rarely discussed, many don’t know how to tell others to stop or they feel intimidated to do so. If not addressed properly or timely, it can progress into larger issues; potential effects include depression, anxiety, difficulty concentrating on schoolwork, and more.

This problem also applies to a larger audience than Cleveland. In our society, appearance tends to have great importance. Oftentimes, people mention or identify others through physical appearance without thinking about how it might affect the other person. Although micro aggression is oftentimes unintentional and may stem from social influences, people must stand up against this type of bullying. Whether it is defending a friend, notifying a parent/guardian, or confronting the perpetrator yourself, this type of bullying needs to end.

Everything you do or say influences another person, whether it is in a positive, neutral, or negative way. Attempt to get to know your peers before making rash judgements or false claims. If you are unsure whether it is offensive, don’t say/do it; you should never have to question your own words or actions.

It is crucial to spread awareness about this type of bullying so people can reflect and become more conscious of their words and actions. Education on micro aggression may be able to get rid of some cases where the perpetrator is unintentionally hurting another person’s feelings. After people are aware of micro aggression, it is necessary to think about how you treat other people on a daily basis.

“We need to become more empathetic towards others’ situations or consider that someone might have a different situation. Teenagers should think more before they say something or act out; it would prevent some of these ‘little fires,’” said Miles.