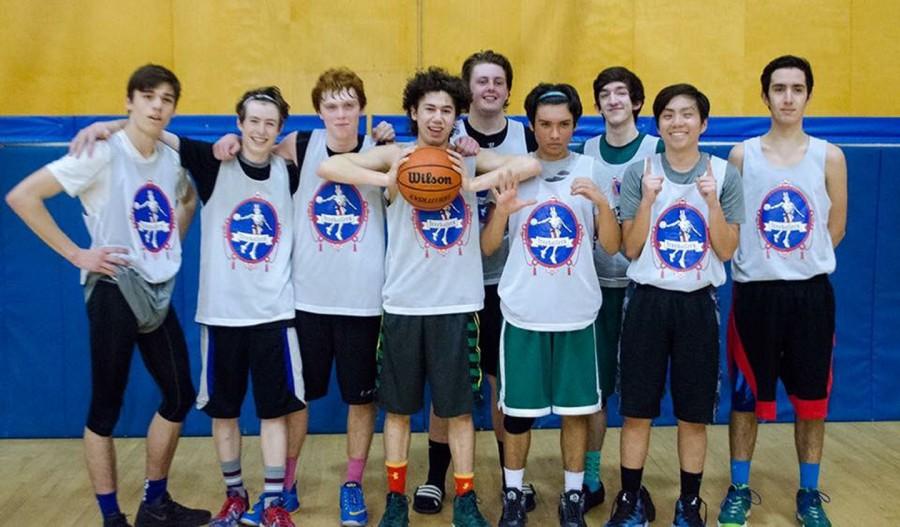 The Boxers posing after a recent win

After being cut from the junior varsity basketball team his sophomore year, Skyler Birk-Stachon was just a local baller without a home to show off his skills, but instead of packing up the sport for good, he took matters into his own hands.

“I was really sad, so I asked Glen (stepdad and basketball enthusiast), ‘what do I do? What would make me feel better?’ and he said, ‘you should start a rec team, with all of your friends, and you guys will kill it,’” said Birk-Stachon, a senior now.

Junior year, Birk-Stachon followed that advice, and comprised a squad of all Cleveland students, several of them former Cleveland program players. That is how Birk-Stachon became founder, President of Basketball Operations, and player-coach of the Freeballers, now the Portland Metro-area’s hottest recreational basketball team. With that, the legend was born.

The story of Freeballer Nation was not an instant success. “We didn’t get that many people and we kind of sucked,” noted Birk-Stachon. Through constant hooping however, playing not only in the Rec league, but also the Three Rivers league, and the recruitment of more key players, the squad grew and improved.

Now in year two, the basketball organization is thriving, known for their free, unstructured playing style. After the summer, 19 Cleveland students signed up to join, enough for two teams. Many of the players share similar stories to Birk-Stachon about their experiences with high school basketball. “I didn’t feel like I was getting the opportunities I deserved with Cleveland basketball. We have a more player-friendly and free environment,” said senior Cyrus Lyday, vice president of Basketball Operations and leading scorer of the Boxers. The new jerseys the team sported this year, designed by center Campbell Sparks, showing Uncle Sam slam dunking, symbolize that freedom Lyday is talking about. “Most of the people who went from playing for Cleveland to the Freeballers realized you can get so much more playing time. Being a benchwarmer is not that fun in my opinion and so people like Adrien, Campbell, Cyrus, who sometimes got playing time on Cleveland, they can start on the Freeballers and just go off on kids,” added Birk-Stachon.

The team’s offense is what the players love about playing. They play an unorthodox style that promotes quick shots and players to launch a barrage of bombs from three-point land. Almost every player is a shooter, connecting on three-pointers as a team at an impressive percentage. “We emulate a mix of the Warriors because we shoot an insane amount of threes, along with the Los Angeles Clippers because it’s also Lob City, and if there are any NBA teams that play a really lazy, aggressive zone, we are like them too,” assessed Birk-Stachon.

To illustrate just how unorthodox the system is, look at the way they select their starting lineups for each game: “A pre-game three point shootout,” Lyday laughed.

This winter, these strategies employed by Birk-Stachon carried the Briefs to an undefeated 8-0 season and the Boxers to a 7-1 record (their lone loss coming at the hands of the Briefs), validation that the team has truly made it. The organization has come a long way since their opening year and the players have come a long way since being overlooked by the high school basketball team.

“We beat everybody in the celebration game, the fun game, and the actual game,” finalized Birk-Stachon.