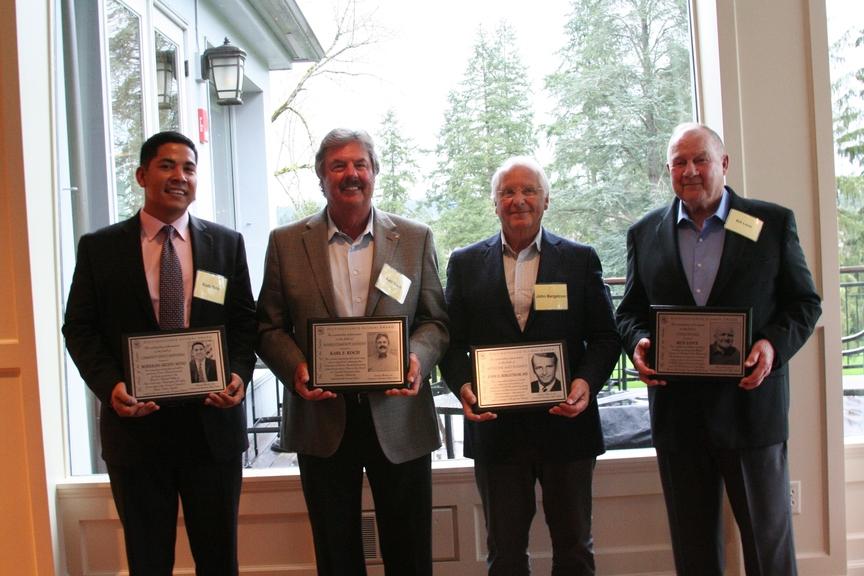 The class of 2016 will be the 100th graduating class of Cleveland High School. With the years of history comes a considerable number of extraordinary alumni. Here enters the Order of the Feather: A group of distinguished Cleveland alumni members who have accomplished spectacular things in their lifetime. Sunday, March 6 marked the eighth annual induction of four more phenomenal alumni.

“These awards are meant to honor alumni who have significant accomplishments in their chosen fields and who can ‘become’ beacons for current students … . Our 2015 inductees validate further belief that the quality of education available at Cleveland High School can prepare current students to journey on a similar path to that of these great performers,” stated the event brochure.

Roy Love graduated from Cleveland in 1955 with a trail of athletic accomplishments that he continued to achieve even after he left Cleveland. Active in both football and baseball, he was also a leader. Love served as the President of Royal C, the letterman’s club, and for several years, Love served on the board of the Commerce Cleveland High School Alumni Association.

After Cleveland, he attended Portland State University and continued his athletic career on the baseball team from 1955 to 1959. Three years later, Love became the head baseball coach where he led his team to one NCAA Pacific Coast Challenge championship and to a second place finish in the NAIA nationals over 13 seasons.

For over 30 years, Love was also a member of the Health and Physical Education faculty while coaching a variety of sports. He had been the Athletic Director for 11 years when he retired but was called back and stayed for another six years.

Unfortunately, Love was not able to make it to the ceremony due to health problems, but his brother Bill Love, who graduated from Cleveland in 1957, read Roy Love’s acceptance letter.

Jack Dunn, who taught at Cleveland for 14 years, expressed what advice he thought Love would have for high school students: “He would tell them to get after their studies and get involved in extracurricular activities whether it be athletics, or drama, or music, whatever, do some exploring what your other interests are.”

John O. Bergstrom M.D. graduated from Cleveland in 1956. Bergstrom is one of many who came to America with a dream, one he succeeded in completing.

Bergstrom grew up in northern Sweden’s agricultural area before deciding to follow his dream of creating a better life for himself. He came alone to America where he found himself in Oregon with no knowledge in the English language or the American culture surrounding him. He attended Cleveland and in a class of approximately 20 students from 11 different countries, Bergstrom began his high school education.

In 1964, Bergstrom gained his M.D. at OHSU where he also did his residency in obstetrics and gynecology. Practicing medicine in Portland, he also had a place as a member of the OHSU faculty. Bergstrom published articles and spoke at medical meetings but never failed to forget where he came from.

Remembering his agricultural roots, he moved his family to Dundee where he planted 13 acres of wine grapes. His hope was to leave a legacy to his children while also paying tribute to where he came from.

In ‘99, Josh Bergstrom joined the family business followed by Kendall Bergstrom and her husband.

Bergstrom Wines now has five estate vineyards (84 acres in total). Their wines are award-winning and recently one of Bergstrom Winery’s pinot noirs was ranked #14 on Wine Spectacular’s list of the top 100 international wines.

Bergstrom had this advice for high school students: “The main thing is to decide early what they’re interested in, what they might be good at so they get right prerequisites for college while they’re in high school.”

Karl Koch graduated from Cleveland in 1961. While attending Cleveland, he became very involved in school while also maintaining a part time job for Dahlin Dental.

Koch participated in the Senior Class play, served as chair on the Senior Class Committee, was the Senior Class President, and participated in both football and track. Graduating from the University of Oregon in ‘65, he preceded to accept a full time job at Dahlin Dental where he stayed until 1974. After leaving Dahlin Dental, he joined Artisan Dental Laboratory as President and grew the company at a rate of about 20 percent per year. Koch and a partner bought Artisan in 1990 and by ‘96, Koch owned the entire company.

Koch became the president of the University of Oregon’s alumni association sometime after graduating in ‘65. He is very involved with serving his community. Koch has held the role of Chair of the Board of Directors for Goodwill Industries of the Columbia Willamette.

Koch’s advice for high school students was to “get as much out of school as you can. Just remember that relationships are things that you need to have throughout your whole life and if you can build good ones and not be afraid to have new ones, life will be a lot easier.”

Rudolf Soto is a 2004 Cleveland graduate. He came to Cleveland from Idaho in an attempt to create a better life for himself.

His mother was a Native American who was adopted at birth. She was raised away from their people, leaving them disconnected to others from their tribe. Soto’s father was a laborer from Mexico. Soto has six brothers and sisters, one of his brothers and a sister were born with spina bifida.

He started out successful in school, but in middle school, a wave of drugs and gangs came into town and caught him up in it. Although he didn’t want to be a part of that culture, the pressure existed and he ended up in the juvenile justice system.

Still in Idaho he began his freshman year of high school where he got straight As, played basketball, and was involved with leadership. Even so, Soto felt like an outsider both in school and in his neighborhood and fell back in with the same group where he ended up back in the juvenile justice system.

One of his brothers had moved away for a better life in Oregon and was an assistant coach at Cleveland. Taking a risk, his brother and his sister-in-law welcomed Soto into their home.

After graduation, Soto went to Portland State University where he majored in Liberal Studies. While at PSU, he served as a student leader on the United Indian Students in Higher Education.

Soto is the first in his family to graduate from college. After graduation, Soto worked as a youth engagement specialist for the National Indian Child Welfare Association. He additionally joined the Oregon National Guard and participated in a community organizing training program in Washington D.C. as part of the Native American Political Leadership Program.

Soto currently remains in Washington D.C. as a political analyst and military police sergeant and he also serves on the National Council of Urban Indian Health.

Soto said during his speech that “receiving this award is meaningful in every way, but what I pledge and promise to do is that I will take it and use the recognition from this to be an example for other at-risk youth so they can try to fulfil their potential as well.”

His advice for high school students is to “get involved with extracurricular activities. Find something you’re passionate about and plan on pursuing your passion, for it will take you to places you’ve never imagined.”