Battle of the Bands did not disappoint 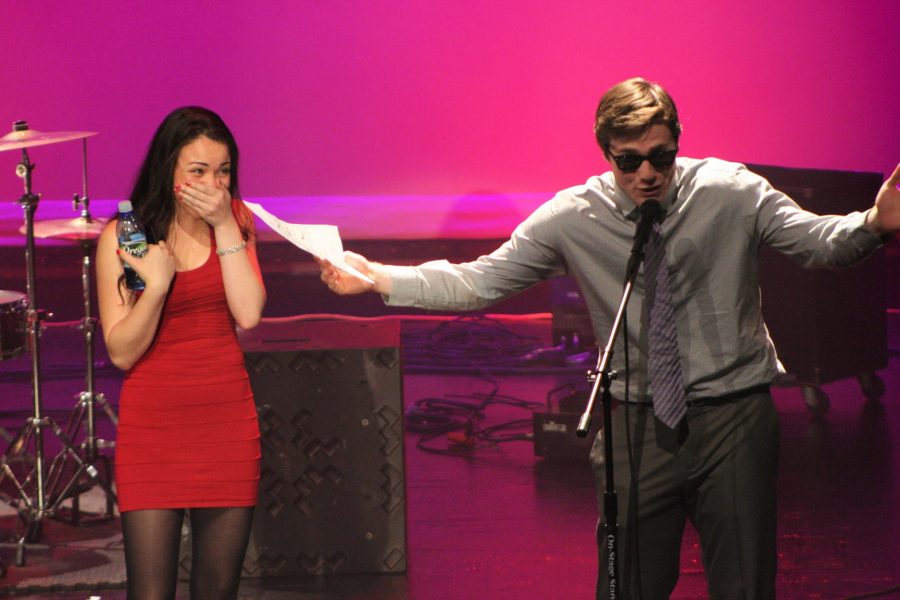 Senior Rain Ezra joins junior Conor Bergin on stage after being announced the winner of the 2016 Battle of the Bands.

By Ashley Lytle and Amanda Kimball

Music fans gathered May 17 in Cleveland’s newly-remodeled auditorium to support students and other local teen artists in this year’s Battle of the Bands. It’s an annual fundraiser held by the junior Class Cabinet, and per usual, it did not disappoint! This year’s winner was senior Rain Ezra who wowed both the audience and the judges with her talents in singing, beatboxing, a combination of both, and her own impressive recorded track.

The night started out with junior Conor Bergin, the MC for the night. His jokes had the entire crowd laughing, capturing the attention of even the older members of the audience. If you’ve ever seen Bergin perform, you know that his wit and stage presence make for one great show.

The first band we saw perform was Hotbox, who covered a variety of raw, sassy, and easy listening songs. We loved the use of the tambourine by lead singer Sarah Jones, a junior, as well as the incorporation of the trumpet by sophomore Cyrus Johnson. A jazzy flair was added in the smooth notes of the keyboard, played by Josh Bair. They were unique features of the performance, separating them from the following groups. Their overall performance was a groovy way to kick-off the show, although we didn’t fall in love.

The second musical group was The Band Formerly Known as Apollo. We felt the songs were catchy, they had great energy, and we loved the serenade in the second song: “Bad Guy,” a heartfelt original written by lead singer Eliot Richardson, a senior at Cleveland. His voice had a pleasant tone and he sang with apparent feeling. They finished their set with a mashup of an original and a cover, which was amazing! The steady, quiet beat of the drums, played by senior Isaac Overstreet,  really made this Ed Sheeran song pop. Their overall performance was engaging and we definitely felt like we’d want to hear more.

The third performance of the night was crowned the 2016 Battle of the Bands champion: Rain Ezra. She was absolutely enrapturing and we couldn’t keep our eyes off the stage. She wowed us and the crowd when she sang while beatboxing. Yes, at the same time. Her two original songs were phenomenal. She truly is a one person band as she proved with her prerecorded music, her guitar skills, and her piano playing. At the end of her set Bergin summed up our thoughts exactly by exclaiming “Where can I find that album? I want to buy it now!”

The end performance was Throwback, a group that’s been steadily gaining fans over the past few years. As last year’s winner of Battle of the Bands, they really lived up to the crowd’s anticipations. Cleveland’s only member, junior Jared Watson, complete with a leopard print jacket and tiger striped tights, started off the show by flinging himself into a midair version of the splits. Their show was energetic the whole way through. Their music had the audience entranced although it might have just been their epic stage presence. One thing’s for sure–they really are a true “throwback” to the golden age of rock.

The success of the show must lend a lot of credit to the renovations of the auditorium and the talents of drama teacher Tom Beckett and his team. The flashing lights timed perfectly to the beat of each song only added to the realistic effect of being at a real rock concert.

Due to the organization and spirit of the junior Class Cabinet, this show went without a hitch and really made our night. They truly outdid themselves this time. If it’s always this good, we suggest leaving your calendars open for this annual tradition!