A fall kickoff to remember 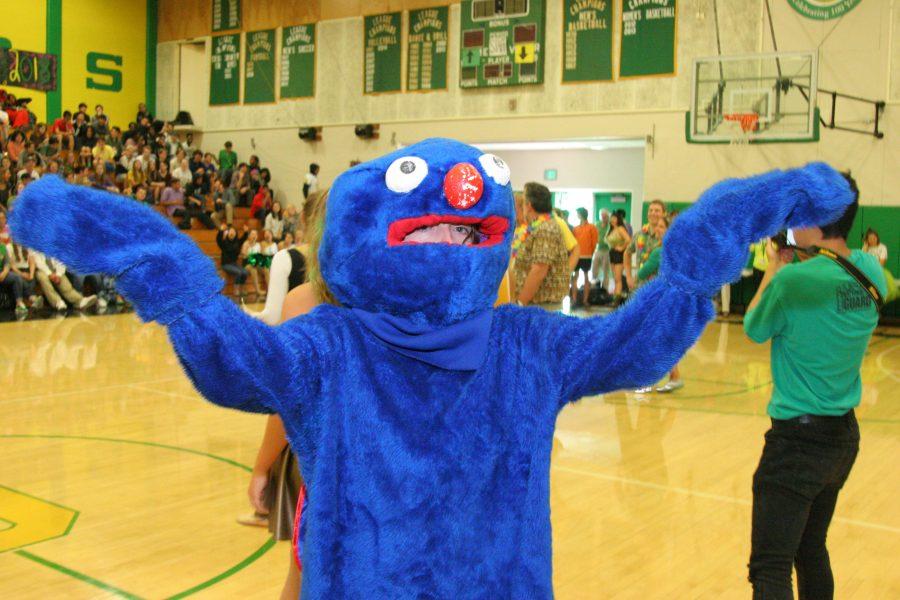 The 2016 school year started off right with Cleveland’s annual kickoff assembly, highlighting what our school is all about: Warrior pride.

On Friday, Sept. 16 Cleveland had its first opportunity this year to showcase their green, gold, and white, as the whole student body marched into the gym decked out in their school spirit, facepaint, glitter, and all.

With only having three weeks to prepare, student body presidents Tori Tefft and Carlin MacMillan, along with the leadership classes, had their hands full preparing what is supposed to be one of the most spirited assemblies of the year.

“We had a lot of different ideas coming in [from the sophomore and junior/senior leadership classes],” MacMillan said after watching the assembly finally come together. “We had a lot of similar games [from last year] and tried to have a similar vibe, because we know that’s kind of popular among Cleveland kids.”  She and Tefft both wanted Cleveland to feel the same energy that the student body is used to feeling.

The 55-minute fall assembly started off as energetic as always with both leadership classes hyping students up by welcoming them through a human tunnel.

The assembly was the first opportunity for students, especially the freshmen, to see what our school has to offer. Dance, cheer, robotics, and drama were just some of the entertainment used to showcase the clubs and sports available at Cleveland.

To start off the assembly, Sophomore Class Presidents Nick Paesler and Gwen Kaliszewski brought up the possibility of ratifying Cleveland’s Constitution. Students will get the opportunity to vote whether to change the laws of our school or not.

After announcements finished, the real entertainment began. The Cleveland ‘Daires kicked off the assembly with their rendition of the national anthem that featured the talent and voice of our own students.

To amp it up, roll call began with juniors beating out the seniors with ear splitting chants and screams. “It’s always the energy, and the fact that people go all out for the assembly and get their Cleveland gear out,” Tiffany Vo, sophomore commented. “You just sit with people, and scream with people you’ve never talked to in class, but it’s just like this whole entire melting pot of community and spirit, and it’s great.” Students feel that assemblies are one of ways the school really connects and comes together as a community, and the juniors felt pretty proud to out-cheer the seniors.

To announce what fall sports are available at Cleveland, the captains from each varsity sport introduced themselves to the crowd and explained when the next home games were to recruit fans.

Following introductions, the varsity cheer team hyped up the crowd with their new moves and chants for the year. Following them, the dance team made their first debut of the year in front of the entire student body with a dynamic routine to kick off their season. The drama department also got in on the action, suggesting what is in store this year by announcing their upcoming performance of “Oh Dad, Poor Dad,” opening later this month.

Pigmice, the robotics team, showcased their new robot out on the floor, which is able to transport people and even kick around a ball. They also had students involved with a challenge; to stack a large battery pack on top of nothing but paper to see how high they could get the battery to stand.

Cleveland also had a chance to become familiar with the new teachers of the 2016-2017 school year. They were treated to Hawaiian leis and a suspenseful high action trivia game that revolved around Cleveland knowledge.

The class relay got students participating and cheering for their classmates as two students from each grade were brought down to compete against other grades. The race had students spinning, stacking cups, running a three-legged race, and more. The Sophomores ended up out-running all other grades by the end of the games.

To close the assembly with a bang, teachers Maggie Appel and Claire Millon lead the student body in a dance that the Warriors are all too familiar with: the Cha Cha Slide. The entire school cha chaed as one to the music provided by DJ Zeke.

The assembly overall was successful, and the goal of the assembly was accomplished, which was to kick off the year by introducing Cleveland and what it means to be a Warrior. “I think people were more inclined to participate in the clubs and go to the sports games,” said Eva Morris, junior when asked how the assembly went.

Even though there was a lot of positivity surrounding the success of the assembly, leadership does know that there will be changes made for the next time around. Students were surprised by the total removal of the fight song and the marching band, which is usually a must-have for Cleveland’s assemblies. However, within the short three weeks there were to prepare such a compacted assembly, MacMillan and Tefft knew how to bring the spirit.

With the homecoming assembly just a few weeks away, you can expect MacMillan, Tefft, and the leadership classes to put their minds together and build off of what was successfully produced this time. Get ready for not just the assemblies, but a year full of spirit and Warrior pride.