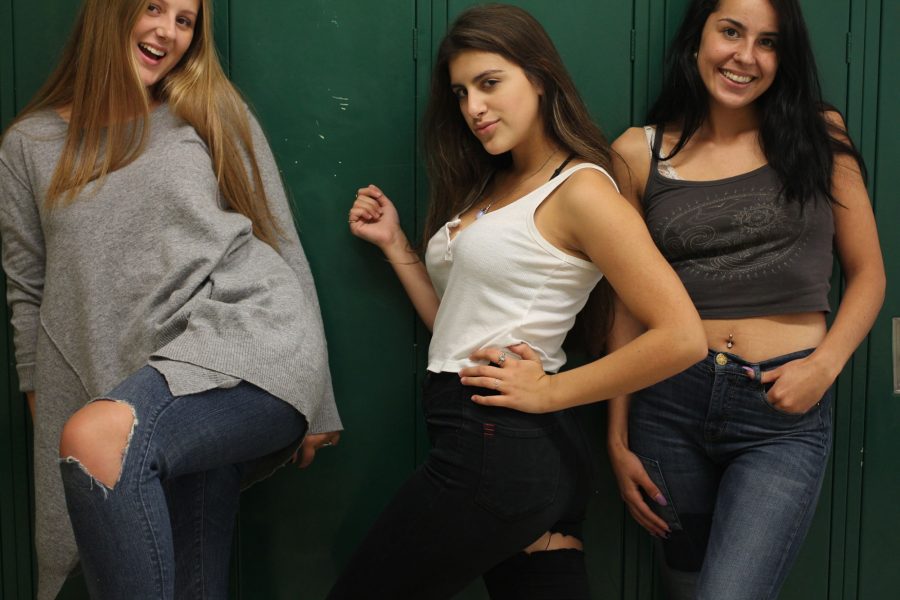 By Lina Clark and Carlin MacMillan

Obsession over bare shoulders and exposed bra straps are over: the dress code has been revised to enforce self-expression and more productive learning environments.

In the past couple of years, dress code issues have raised controversy for sexualizing rules and objectifying perspectives of the female body. From a young age, the typical dress code enforces the idea that women need to “cover up,” intending to create less distraction for the male population by making girls change.

“As a curvy girl, I’m expected to manage how much skin I’m showing a lot more than smaller girls. Like somehow my body is more inherently sexual than theirs. My mother once said, ‘I have cleavage even in a turtleneck,’ and I feel like that a lot of the time,” said Annabelle Schwartz, senior.

Previously, the dress code restrictions included covered midriffs, no spaghetti straps, no strapless shirts, shorts and skirts the length of fingertips. Compared to other schools in the Portland area, especially private schools, Cleveland has had rather lenient rules allowing the student body to wear sweatpants, tank tops, frayed clothing, leggings, and more.

Most rules singled out the female gender, inconsistently applying the dress code and unfairly judging what is appropriate depending on the body type of the person. Through categorizing right and wrong, the focus of school was shifted to keeping up appearances before receiving an education. Many kids have had the uncomfortable experience of being taken out of class or pulled aside in the hallway to talk about “proper school attire.” Tired of the mistreatment, students began voicing their feelings regarding the dress code.

In response to controversial dress policies, Portland Public Schools assembled the District Dress Code Advisory Committee (DDCAC) in 2015 to discuss new wardrobe guidelines. Teachers, school administrators, students and parents worked with the PPS staff, meeting from November of 2015 to May 2016 once a month over the seven month period.

The DDCAC’s intent was to create and support an environment where students were treated equally, regardless of gender identification, ethnicity, race, sexual orientation, body type, religion and personal style. The organization examined the reasons why we have a dress code and its objective, as well as looking at equity and dignity among students. Teachers and administrators shared their experiences with previous implementation of rules, also getting feedback from surveys surrounding this matter, thoroughly deliberating all perspectives of the issue.

The adjustments made by the DDCAC welcome a more open conversation about dress code, and take away the aspects that were inherently sexist. Drew Cooksey, junior, explains that she feels safer knowing her attire will be accepted at school. “I don’t want to have to worry about how I present myself. It makes my day more stressful when I am conscious about looks,” said Cooksey.

“I think it’s a step in the right direction because it’s not as gender specific,” said senior Anna Litchman, commenting on the new changes.

The development in the PPS guidelines have immensely improved the environment at school, according to students. Cleveland students, as well as kids across the PPS district are now able to more freely express themselves through the clothing they choose to wear. They can enjoy an academic experience without the worry of “showing too much skin” and “distracting” others in class.

“Now I can feel confident in the halls without feeling the threat or embarrassment of having to change clothes,” said Sydney Deshazo, senior. She feels at peace knowing that she will no longer spend time worrying about her appearances at Cleveland. That’s the best kind of dress code.