Why is Waking Up Such Torture for High School Students? 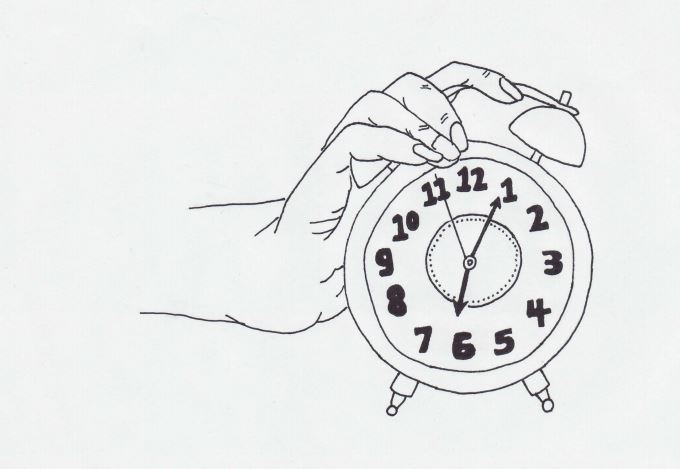 We all envy those kids who can keep their eyes open in the morning, who can absorb what the teacher is saying and form a coherent thought. We all have had those days where you have a test the next morning and a project is due second period and you have sports after school. The only logical solution is to study and work until 3 a.m., or your grades will suffer. You can tell yourself that you will wake up early, but it’s already 1 a.m. and you can’t even imagine waking up any earlier than you have to. Why is it that even though we are told that teenagers have to have eight to 10 hours of sleep, we are lucky to get seven hours of shut eye?

Our parents and teachers say to just go to bed earlier, however medical research has shown that there are biological reasons why teenagers find it difficult to fall asleep before 11 p.m. One study by the CDC, “Schools Start Too Early,” reported that only 15 percent of teens get more than eight hours of sleep. And on average, teens are only getting seven to seven and a half hours of sleep. This is insane. In 42 states that were surveyed, almost all had school start times that were before 8:30 a.m. That’s too early for teenagers who have trouble falling asleep before 11 p.m.

“I have cross country practice after school, I get home and have to take a shower and eat dinner, and by the time I sit down to do my two hours of homework, it’s eight o’clock. I have to choose between getting all my work done or sleeping enough,” said Emily Swinth, a junior.

If you go to bed at 11 p.m. and have to wake up at 7 a.m. to get ready for school, you would only get eight hours of sleep. (Yeah, math!) That isn’t taking into account the fact that some students will wake up earlier to study or finish homework that they couldn’t complete the night before. It is seemingly impossible for a student to get 10 hours of sleep at Cleveland.

On a more severe note, lack of sleep can lead to serious health problems. In a study by Harvard Medical School, “Consequence of Insufficient Sleep,” they list the effects of long term and short term sleep deprivation. Short term effects include: impaired judgment, mood swings, and the inability to learn and retain information. Long term sleep deprivation can lead to obesity, diabetes, heart disease, and even early mortality. These are serious issues for high school students.

“School is already stressful enough and if I’m tired and can’t emotionally handle it, it makes me more stressed out,” said McKenzie Potter-Moen, a junior.

Why, if there are so many studies proving that school starts too early and that students are not getting the recommended sleep for their growing minds and bodies, is it that the school districts hasn’t changed the time school starts? How can the district value time spent in class more than they value the student’s health? What is the point of being in class if you are too exhausted to learn?

I asked these questions to Paul Anthony and Steve Buel, two of the eight members of Portland Public Schools Board of Education. They had a lot to say about this matter:

“The current schedule is set because of tradition, and then it’s hard to shift because of the supporting structures that have built up around it over the years:  what many employers consider to be the standard workday, TriMet schedules, daycare schedules, after-school support schedules, and, of course, other districts’ athletic schedules… The first pushback comes from the athletic department, saying that other districts in the immediate region are not making such changes, so PPS will no longer be able to compete,” said Anthony.

So why hasn’t this change happened yet? Is PPS working on a solution? I wanted to know.

“No one has brought it up to the school board yet, for many reasons. Some teachers and adults like the early start. And I think one of the other problems is the sports. If schools were to start later, then the athletics would end later… I believe that students have ownership over the issue and that they will be the ones to bring it up and support it,” said Buel.

“After Seattle’s experience, I strongly suspect that if PPS went with a later start, many of the other outlying districts in the region would likely do the same – it makes so much more sense for students, their learning and development, and their overall health,” said Anthony.

With all the new studies that are being cranked out, it might be possible for the school district to change their mind, and do something about PPS start time. Seattle has changed to a later school start time. We can only hope that PPS will understand how crucial sleep is for their students’ health and well-being.