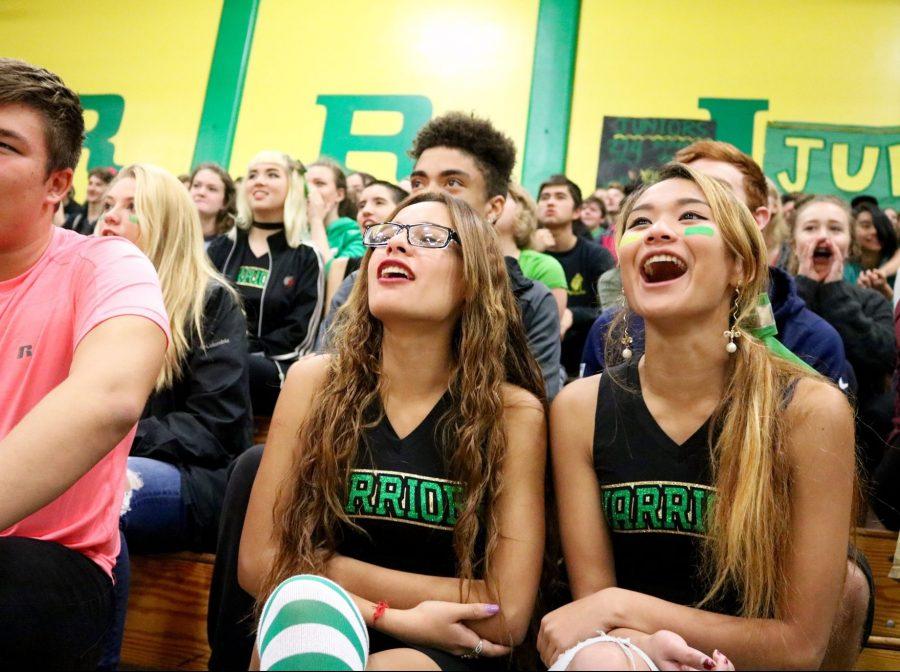 Cleveland students go back to the basics sporting the classic green and yellow football stripes rather than double stripes or dots.

In 1988, Cleveland changed its mascot from the Indians to the Warriors, and the school newspaper went from The Tomahawk to The Clarion. Such name changes were thought to be the end of all Native American appropriation within Cleveland’s walls. However, some say it still lingers today from the Sundancers, Cleveland’s dance team, to face paint for assemblies, to traditions sport teams continue to participate in.

Appropriation is defined as “the action of taking something for one’s own use, typically without the owner’s permission.” It exists today in many different forms, most prominently heard of is the appropriation of others’ cultures. Appropriation of one’s culture can be a name (discriminatory or not), a design, or even a style.

Those numbers tell a story far from the idea that Native Americans are no longer suffering. After being massacred, having their culture and land stolen, and being forced to assimilate, they’re still left struggling today. Poverty, lost traditions, appropriation, are all ways they continue to suffer.

Cleveland teacher Tim Graham’s I.B. History of the Americas (H.O.T.A) class has a lesson on appropriation every year. Hoping to connect the ideas they learn in class to local issues, he educates them on the custom of the “Sundance” in many native tribes, specifically looking at the Sioux.

“In class I teach about the ritual of the Sundance. There are different cultures who do different versions of the Sundance and worshipping the sun, but in many Native American cultures, the Sundance is this right of passage where tribal members would go on this sort of vision quest. It also involved them attaching themselves to a tree with these bone hooks and pulling themselves off the tree, pulling these hooks out of their skin, leaving them with scars on their chest, showing they’d gone through this ritual,” explained Graham.

The Cleveland Sundancers bear the same name as that sacred tradition many tribes still practice today. Graham explained that many students are shocked to discover that connection. He’s been teaching this lesson for approximately four years, hoping to help make students more aware of ways cultures are appropriated.

“I think it is offensive. It is taking someone else’s very spiritual practice and turning it into something completely different,” said Cleveland senior Simon Brown. “The Sundance is this extremely spiritual thing. It’s something that they hold very important to their culture and the fact that we’re taking that name, using it, just throwing it around lightly just to represent our dance team, when it doesn’t really mean anything to us is offensive.” Brown descended from the Ojibwe tribe, but the other side of his family are all Northern Cheyenne.

Anna Litchman is a Cleveland senior and has been a Sundancer for the past four years. Litchman is a part of the Coos, a Native American tribe. “I’ve been totally aware of what [Sundance] means and how it relates to Native American culture. It didn’t alarm me initially. Over the years, my family members have known my team is called Sundancers. I just have never been told by someone from a tribe that they’re offended by it.” Litchman continued, “If you become aware that it’s [a part of their culture] then I think it is important to reach out. I just think it’s hard for people to do that because if they don’t hear people saying it’s not ok, they just think it’s ok. I’d be interested to see how people feel about it, especially people in other tribes who participate in the Sundance ritual.”

Criss Burgess-Haneberg is a current volunteer coach for the Sundancers but has been involved with coaching the team since 1978. “When I originally started, the school was the Indians and the newspaper was named the Tomahawk.When the change from Indians to the Warriors were made all the names were reviewed and the Sundancers was determined to be ok. The sun belongs to everyone. It simply is the sun and dancing. Our logo for the last 39 years has been a happy sun with ballet slippers. The sun belongs to all of us, not one ethnic group. We just focus on the fact that the sun is bright and sunny and we dance. I have as much right and so does the team, and so does anyone, every race of people. To us as a team, it has never had anything to do with something strictly Native American.”

Cleveland Principal Tammy O’Neill had never thought of the name Sundancers as possibly being culturally insensitive. “Not a darn one of us is going to say we are perfect or that every decision is the absolute best one. We have to be as a community, accepting of mistakes, and learn from our mistakes, and evolve as our practices are highlighted to be discriminatory or offensive towards others. If it’s just one person who feels marginalized by a term or a title, then that’s something for us to examine. We are a school community. We need to be accepting and inclusionary of all people. And if there’s any practice that goes against that then we need to examine that.”

“These names can be changed and historically have been changed. In the past at pep assemblies you had the mascot, the Cleveland Indian, going out and scalping a Franklin Quaker, Franklin’s mascot. That is part of the history of Cleveland and thankfully we’ve moved away from that. We changed, change is possible,” said Graham.

The name Sundancers is not the only sign of Native American culture within Cleveland. A senior on the football team confirmed the use of the chant “Tribe on me! Tribe on three!” by the Cleveland football team. And earlier this school year, a Native American student came forward speaking out against the facepaint being done at pep assemblies.

“I remember freshman and sophomore year people mainly just did the football rectangles which football players use mainly to keep the sun off their faces. As we got older, I saw people start doing the dots and the lines, shapes above their eyebrows, and whatever. I totally see how it’s not considered ok. I grew up seeing the men in my tribe do that at pow wows to their faces and it’s very spiritual. You don’t just throw that paint on. It has to be done by a certain person in a certain way. Each line, each color means something,” said Litchman.

After receiving the complaint the leadership classes decided to go back to the rectangles and allow students to have “CHS” written on their face.

Litchman said, “If the culture it’s from, if those people say it’s ok, and they feel respected, and like their voices are heard, then it’s ok. If there’s any hint that someone is concerned or offense is taken from someone in that culture then we need to stop it immediately.”

“I think [Cleveland] needs to be a lot more aware of Native American issues. I think that right now, a lot of other racial problems are going around where we’re actually paying attention, which I think is incredible. I do think one that’s not getting as much light is Native American cultures, and I think it needs to be more recognized at [Cleveland] and in our community. It’s one of the most thrown around things. If it was any other race being used in [the way] Native American culture is it would be seen as completely offensive, and people just don’t recognize it,” said Brown.

For her part, O’Neill knows there is a lot of work to be done. “We need to continue doing work on our racial consciousness. And looking at our practices through an equity, racial, and cultural lense. We need to always be aware of who has the privilege in the situation and making sure we are protecting everyone and their individuality and their culture, and celebrating instead of stereotyping,” she said.

Continuing education and conversations keep students informed as to what is appropriation and how they may be adding to it. Native Americans continue to speak out both locally and nationally about issues affecting them. One of the most prevalent issues being the DAPL protests in North Dakota. “If you are not part of a culture, or you do not identify with a certain culture, you cannot tell them it’s not offensive,” said Brown.