The Real and Pressing Reality of Climate Change Under Trump 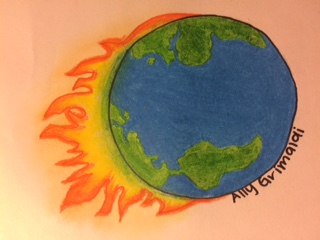 CO2 levels in the atmosphere are at the highest they’ve been in 650,000 years.

The sun pierces down like a laser beam onto the parched ground. The landscape is bare, desolate, and dead. The air reeks of the exhaust that has poisoned the wind for longer than many can remember. Fresh water is scarce, but fire is plentiful, hopeful that the brush will quench its undying thirst. The sea has consumed the corners of the Earth like a hungry machine. It has massacred mountains and drowned cities, wreaking pandemonium in its wake. Tornadoes rage in the opaque skyline, mimicking the whip of the hollowed wind. A single tree stands silently alone, a stark reminder of what once was, what once could have been, if only they had cared for something other than themselves.

This sounds like a science fiction movie, but in just a few years, this will be our reality. Sometimes, the truth is more frightening than fiction.

Global warming is defined as “a gradual increase in the overall temperature of the Earth’s atmosphere, generally attributed to the greenhouse effect, [and] caused by increased levels of carbon dioxide, chlorofluorocarbons, and other pollutants.” Simply explained, carbon dioxide (CO2) is released into the air, primarily as a result of fossil fuel emissions. This CO2 gets trapped in the atmosphere, insulating the Earth like a blanket. This causes the Earth’s average temperature to rise, which melts polar ice and disarrays weather patterns. Ninety-seven percent of climatologists cite human activity as the cause for this phenomenon.

Unfortunately, climate change is not just a fear for the future; it is a concern of the present. According to the National Aeronautics and Space Administration (NASA), CO2 levels in the atmosphere are at the highest they’ve been in 650,000 years. Similarly, since 1880 alone, the global temperature has increased by 1.7 degrees Fahrenheit. This may seem like a miniscule difference, but it has had a monumental effect on the Earth. Arctic ice has been reduced by 13.3 percent per decade, and as a result, sea levels have risen by seven inches in the past century. Fifty percent of coral reefs have been lost during the last 30 years alone, and species are dying off at 1000 times the natural rate. This disaster is our doing.

The United States is the second biggest emitter of greenhouse gases in the world following only after China, according to the World Resources Institute. Last year alone, the U.S. produced 900 million tons of coal, enough to fill 16.3 million average-sized swimming pools. This is alarming considering the fact that the U.S. has actually cut down on coal production by 25 percent since 2008, according to TIME magazine. This change was following the U.S.’s promise to uphold the standards outlined in the Paris Agreement, an affirmation that president-elect Trump has sworn to revoke.

Not unlike the 53 percent of Republicans that deny global warming as reported by the Scientific American, Trump has been ruefully unsympathetic to the threats that climate change proposes. “The concept of global warming was created by and for the Chinese in order to make U.S. manufacturing non-competitive,” tweeted Trump in 2012. Trump’s euphemistically-labeled “plan” to combat climate change is to “unleash America’s $50 trillion in untapped shale, oil, and natural gas, plus hundreds of years in clean coal reserves,” according to his website. In other words, Trump does not care that we are killing the Earth.

It is unsurprising, given the impressive levels of ignorance surrounding the topic of climate change, that 34 percent of Congressional officers deny global warming. Granted that knowledge, it is also unsurprising that a copious amount of those officers have been paid to support that stance by fossil fuel companies like the Koch brothers. For instance, $2.2 million of Sen. Ted Cruz’s (R-Texas) backing is funded by the fossil fuel industry. Senator James Inhofe (R-Okla.), the poster boy for global warming denialism, receives $1.8 million yearly for maintaining that climate change is the “greatest hoax ever perpetrated on the American people.” Cruz and Inhofe are just two of the many officers who have been silenced by greed; corruption has infiltrated the entire government and has bought many voices.

To add insult to injury, nearly 85 percent of registered voters support the existence of climate change and bolster increased funding for wind and solar energy. Politicians, who are supposed to account as a representation of the people’s wishes, do not do this support justice. A survey facilitated in 2014 by Politifact found that out of the 278 Congressional Republicans, only eight openly supported climate change, while a Yale and George Mason poll found that 47 percent of Republican voters say that global warming is on the rise.

By the year 2030, global sea levels could be as many as 16.5 feet taller. By 2040, it is expected that boats will be able to sail straight over the North Pole, as there will be no ice left. By 2050, polar bears and seals are predicted to be extinct. If this isn’t reason enough to support climate change, I don’t know what is.

Of the 9 billion metric tons of carbon emissions expelled into the atmosphere yearly, the United States invests in 16 percent. This immense contribution to global warming is exactly why the United States needs to be a leader in the transition to the use of renewable energy. Unlike coal, oil, and natural gas, wind and solar power will never be exhausted. Renewable energy is also cost-competitive with fossil fuels in the U.S., and the solar industry alone employs 200,000 people. This industry, along with wind power, is growing at a rate of 20 percent annually. Best of all, if the world stopped using fossil fuels at this very moment, we would actually have a chance of saving the world from complete devastation.

Unfortunately, complete reliance on wind and solar energy is not realistic. For many countries, unlike the United States, renewable energy is much more expensive than coal.  However, if the U.S. made the switch to clean energy and paved the path for other countries to follow suit, the world could actually make progress on combating climate change.

Sen. Inhofe once said that implementation of the climate change “hoax” was due to the fact that “there are some people who are so arrogant to think they are so powerful they can change climate.” To me, arrogance is not the belief that man has the power to induce global warming. Arrogance is the belief that we do not have a responsibility to take accountability for our actions. Arrogance is the belief that our mistakes don’t have consequences. Inhofe, there is no hoax. There is no question whether or not climate change is real. It is not a political issue. It is a fact. And if we do not address it, it will obliterate us.

We are seeing the effects of global warming, right here and right now. The ice caps are melting before our very eyes. Sea levels are rising. The global temperature is skyrocketing. And here we are, discussing the validity of proof we already have. The clock is ticking and we need to make a move. It is imperative for our future that we take action.

As individuals, we have the power to effect small changes through recycling, buying locally, and through other ways of conservation, but we cannot stop global warming. We need to come together as a world to address climate change and our steps to solve it. Sometimes, reality can be more frightening than fiction. Luckily, we get to decide how this ends. As an individual, your vote is your most powerful weapon. Support leaders who will fight climate change by investing in renewable energy, leaving fossil fuels in the ground, and ending fossil fuel subsidies. Speak for your future and never let go.

The fate of humanity rests in your hands.