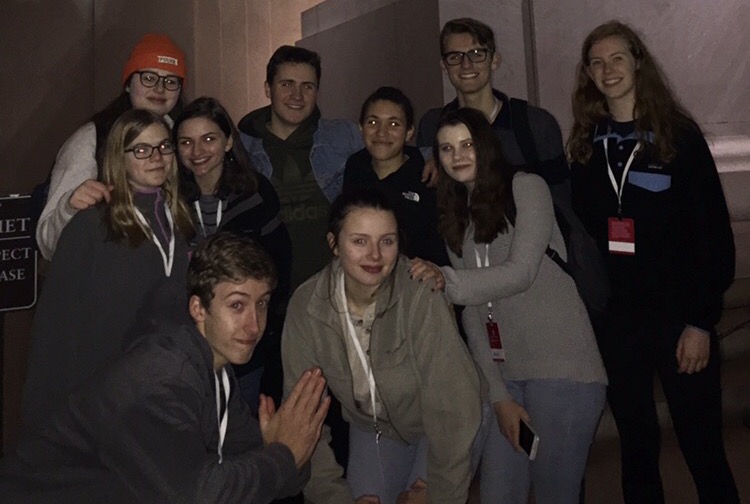 Sixteen Cleveland students and history teacher Sadie Adams left for Washington D.C. on Jan. 18, and contrary to the initial plans, will not be attending the inauguration of president-elect Donald Trump Friday.

On the day of the inauguration, rather than watching Donald Trump being sworn into office as the 45th President of the United States, the students will take a tour of Mt. Vernon, George Washington’s home, among other various sight-seeing opportunities in the country’s capital.

The initial plan for the trip was to attend the inauguration and go sightseeing at the historical landmarks of Washington D.C., but following the results of the 2016 presidential election, concerns arose among students surrounding the attendance of the event. Many immediately voiced their feelings of being unsafe.

“I was a little frightened. I didn’t know what we were really going to do, but I just could not justify myself to go the inauguration from the beginning once I found out, just because even though it’s such a historical United States moment, the main point of the inauguration is you’re standing there in support of the person being inaugurated. I just can’t. I don’t have the ability to do that with what I believe,” said Nick Paesler, sophomore.

In light of the election, many students shared the same views as Paesler, not wanting to be there to see Trump inaugurated.

“I was kind of worried when I found out that Trump was elected,” said Olivia Sheen, sophomore. “A big concern was safety. We were worried about, you know a city full of Trump supporters, and so that was one of the concerns. I also just didn’t want to see him get inaugurated, like I just didn’t want to physically be there to see that happen. If I really wanted to, I could search it up on a YouTube video a week later.”

The parents and students had a meeting with Adams in early December to propose ideas of ways to alter the trip to make it a fun and safe opportunity for everyone.

“I felt I needed to provide an alternate because I had so many of them expressing concerns,” said Adams.

The current plan is to go sightseeing as primarily planned, including places such as the new African-American history museum, the Holocaust museum, and the Marine Corps museum, with the biggest change being that they will not be present at inauguration. One of the major events that the students decided to include in their trip is attending the Women’s March on Washington.

The Women’s March on Washington is a movement to show support of women’s rights and honor LGBTQ+ rights, diverse religious faiths, people with disabilities, and others who have previously fought for civil rights. The organization released a statement saying, “We stand together in solidarity with our partners and children for the protection of our rights, our safety, our health, and our families – recognizing that our vibrant and diverse communities are the strength of our country.” The Cleveland students will march among an estimated quarter of a million people who support this as well, starting at the U.S. Capitol. They will partake in this event on Jan. 21, the day following the inauguration.

Adams expressed that this is a student-oriented trip, and an opportunity for them to choose what they want to do and make the most of it.

“The decision was not mine. The decision was completely left to the parents and students,” said Adams. “My utmost concern for the entire trip is making sure that the kids that are going are in a safe situation, and that’s what I expressed to parents, that I left the decision completely up to them. Mainly from students, [the concern] was a sense of feeling safe at the inauguration with people who they might not necessarily share the same views as.”

The changes to the trip providing alternate plans proved to be a good way to compensate for not going to the inauguration, as the students are happy with the new changes and that their safety was addressed so that they can enjoy the trip.