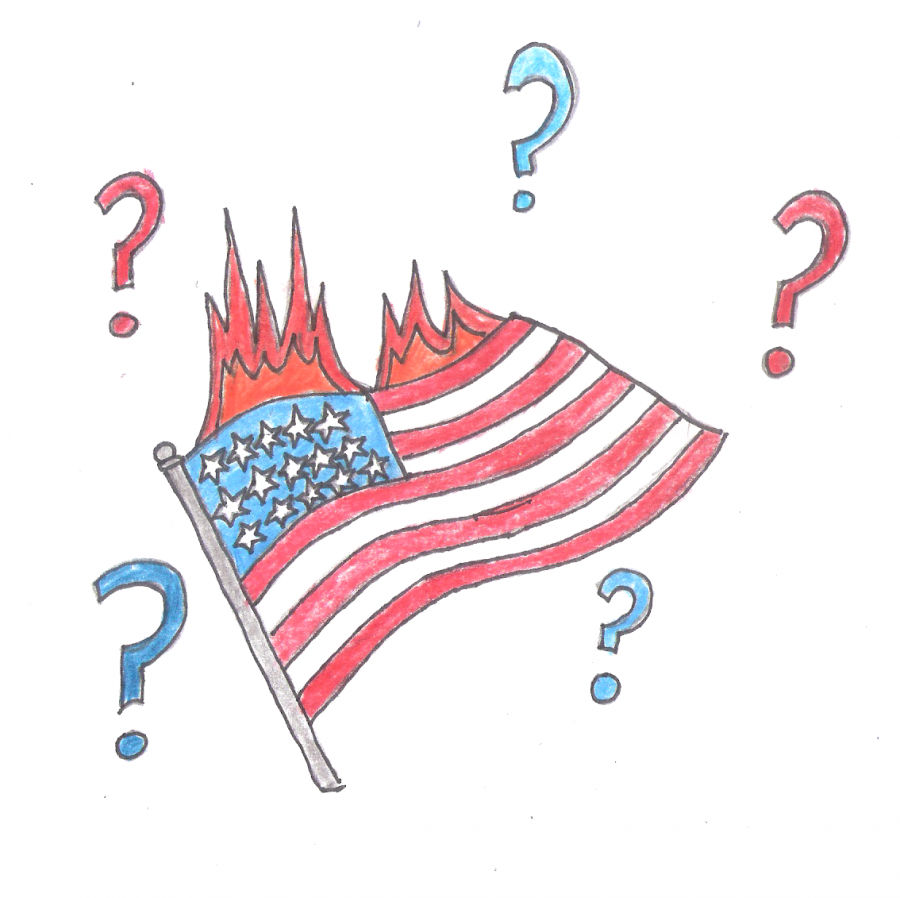 Should the flag be burned in protest?

It’s the longest standing emblem in this country, and one that represents the integral values of liberty, freedom, and justice that the United States has upheld for the past 241 years: The American flag. Yet, in recent times, this symbol for equality and fairness has come under fire. Literally.

Flag desecration is nothing new to this country—the demonstration has been prevalent since long before the Vietnam War, when the act of protest first picked up speed. Deemed a freedom of speech, flag desecration was first ruled a Constitutional right by the Supreme Court in 1989 during the Texas v. Johnson case, which legalized the act. Ironically, unbeknownst to many modern day critics who take advantage of this freedom, the very flag in which they protest affords them the right to desecrate it.

On June 14, 1777, Continental Congress passed an act establishing the familiar red, white, and blue stars and stripes as the official flag for the United States. The flag was not designed in a random pattern; the stripes represent the thirteen original colonies, while the stars symbolize the admission of each state to the union. The colors, red, white, and blue, are said to convey their own distinctive meanings, ones of hardiness, valor, purity, perseverance, vigilance, and justice. Today, 240 years later, the American flag still solidly preserves and embodies these values, and for many, typifies the indomitable spirit of determination for which our country stands.

In its pledge of allegiance, the flag vows to protect our country and “the republic for which it stands. One nation under God, indivisible, with liberty and justice for all.” This representation of hope, liberty, and justice, is the quintessence of what our flag and country stands for.

Instead of cherishing these values, many protesters take for granted and disregard the privilege this country affords them. The flag has been vilified by those who do not understand the value of sacrifice, honor, and independence that millions of veterans have risked their lives fighting to protect. These people cannot see their privilege.

My status as a white person has blinded me to many issues concerning discrimination and bigotry that occur daily in my country. As a Jewish woman, I understand some of these problems, yet I am not ignorant to the fact that my skin color licenses me to privilege and security in society. Needless to say, the United States has enormous problems regarding inequality. While our Constitution promises liberty and justice for all, not everyone receives those privileges. Furthermore, we must fight for those who are not treated equally, which is the beauty of protesting.

The United States has carried out a foul and oppressive legacy. It is a country that thrived upon the exploitation of other human beings, and it is no secret that we have a long and brutal history of depriving African Americans, Indigenous peoples, and numerous other minority groups of their God-given rights. There are dark, villainous parts of our country’s history that we should be not be proud of, and we should be ashamed to admit that many of the issues underscored by our past are problems that we continue to face today. This is why protesting is absolutely necessary to remind America of the rights this country owes to us. The act of peaceful protest is a fundamental checks and balances system to keep the United States accountable and secure the sentiments upon which our country was founded. Desecrating the flag, however, is taking the responsibility to stand up for what is right to an extreme. Burning the flag is not an act of protest; it is an act of ignorance.

Martin Luther King Jr. once said, “Returning violence for violence multiplies violence, adding deeper darkness to a night already devoid of stars.” To light a flag on fire, one that to many epitomizes the values of freedom, justice, liberty, and equality, is to fight hatred, violence, and oppression with same qualities in return. Desecrating the flag is not an act that carries out its intended meaning of igniting the spark to end inequality. It is instead an act of violence, destruction, and blatant disrespect for the millions of soldiers that have died fighting to defend the very rights that allow protesters to burn that flag. It is an act of cowardice, not of courage.

Desecrating the flag is not the solution to the bigotry, discrimination, and hate that ravage America. The solution is to work to create a stronger, healthier, more inclusive, and more introspective America through peaceful protests, respect, and unity. Do not burn America. Better it. Like MLK said, “Hate cannot drive out hate: Only love can do that.”

Thanks to the laws in this country, every person has the prerogative to burn the flag. However, just because it is a right, does not mean it is the right thing to do. Protesting is a beautiful, powerful thing. Do not ruin it with destruction and cowardice. Do not belittle and disrespect the millions of veterans who have sacrificed their lives and security to serve this country. There are more profound ways of protesting.

“Look me up if you want to come [to the grave sites of the Medal of Honor winners in the Willamette National Cemetery] and we can talk about it,” said Eric Post, former Marine combat engineer. “I’ll happily let you read what real heroes have done. Real heroes, not cowards with a lighter and a store-bought flag that doesn’t mean anything to you. You will get wise one day and realize the symbol of the flag isn’t what you’re protesting. That’s what gives you the ability to protest. You should cherish that. Not burn it.”