Another successful year for the annual Versus week. 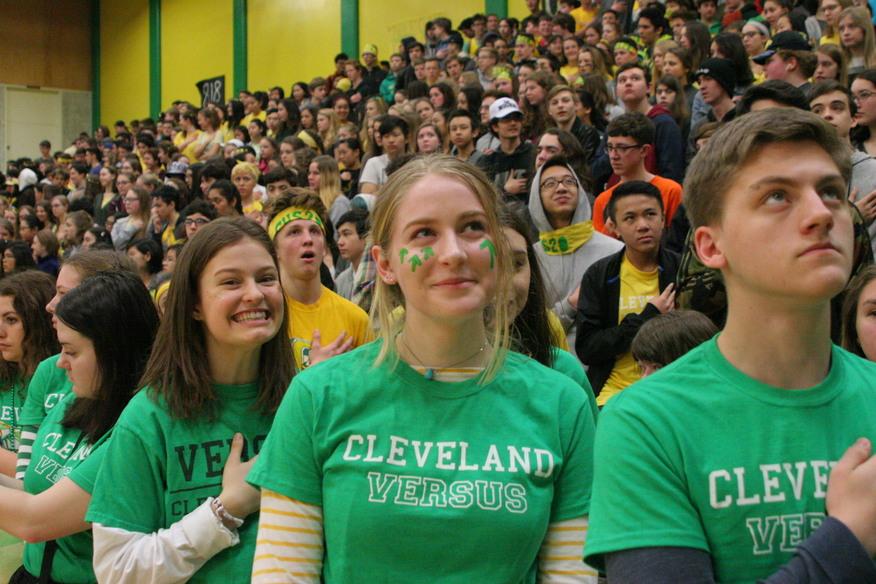 The leadership classes created the lively and energizing vibe that was felt the moment you walked through the doors, as the students were united in a sea of yellow, gold, and green, chanting words of encouragement and spirit. The gym echoed in cheers of students supporting their classes. “I saw a lot of spirited faces,” sophomore Tiffany Vo described. “The crowd was super hyped, and I feel that the energy this year for this assembly, compared to other assemblies improved so so much.”

The Daires kicked off the assembly with their rendition of the national anthem, as Cleveland students listened thoughtfully with their hands over their hearts, proudly proclaiming that Cleveland is the home of the Warriors.

Roll call was then carried out, with the upperclassmen taking the victory as voted by the Mom Squad. A remarkable performance executed by the cheer team followed roll call, leaving students in awe. Cheerleaders were thrown into the air to show off their best stunts.

Cleveland also made sure to recognize PIL Solo & Ensemble winners in vocal and instrumental music, calling to the floor those who placed to be acknowledged for their hard work.

The real competition began following the announcements and recognition. The assembly showcased activities that were brand new to a Versus assembly. With one representative from underclassmen, upperclassmen, and the staff, two students and one teacher initiated the competition with the running challenge, where the competitors were required to jog in place on the sidelines during the remaining hour or so of the assembly. If they were caught not jogging, the result was disqualification.

The first game, “Hungry Hippos,” was the first victory for the underclassmen, as students were pushed to the center of the gym on rolling seats, collecting tennis balls to imitate the real-life board game. The staff swept both classes with their skills through the yoga challenge, where a range of complicated yoga poses were displayed for the competitors to imitate. This was one of the most highly contested victories with upperclassmen calling for a recount.

The dance-off and lip-sync, however, seemed to be the most celebrated competition for the classes and staff. The dance-off triumph was handed off to the underclassmen as the whole crowd was brought to their feet. The staff took the lip-sync win after teachers Eric Mirsepassi and Jamie Incorvia gave an unexpected Katy Perry performance that even incorporated props.

“I think that lip-sync battles and the dance-offs are always good because they’re classics,” junior Riley Holenstein explained. “I think that everyone has a lot of fun with them, and everyone always laughs, and it’s just a good time.”

Dance team had the opportunity as well to present to the student body the hard work they put into this season by showcasing their PIL-winning routine, themed to the music of “Titanic.”

The assembly went overtime as the teams competed in a game of messy Twister. Students and staff slipped and struggled to stand their ground in puddles set with shaving cream.

As the assembly drew to a close, the Cha-Cha Slide concluded as usual where seniors were prompted to their feet to dance while freshmen, sophomores, and juniors ceremoniously moved to their next year’s section. The upperclassmen took the overall lead in the Versus competition proving their winning streak once again with a total score of 13. Underclassmen followed closely with 12 points, and the staff came in third with 11.

Students seemed to enjoy the competition and cordial rivalry this Versus week and competition brought to our school.

“My favorite moment of the assembly is when the staff would win or the upper or the under would win, right, and then everyone would just stand up and start cheering the heck out of it. That was just one of the best moments to capture, especially through a [photographer’s] lense too because you can feel the energy,” Vo explained. Students enjoyed proving to the other classes how their class should be the most honorable, but in the end, all enjoyed seeing what their school had to offer.

Getting the students involved was also an extremely important part of the Versus week. Bringing the school together is the purpose of the competition and the week as a whole. “It’s good to kind of have closure on the week too,” junior Vivian Arnone described. “It brings purpose to the week more.”

Freshmen also enjoyed getting in on one of the most spirited assemblies of the year. Freshman Coleman Neher recounted how the assembly had a lot “of really hyped moments.” However, the class of 2020, as well as the entire student body, hopes that next year people will bring up the spirit. Holenstein hopes to make the 2018 assembly further coincide with the spirit days, and to get more students and staff involved in the games and spirit days.

Additionally, the whole Versus week revolved around the entire student body showcasing their spirit by dressing up for specific spirit days. The days included kindergarten versus college, “Grease” versus Greece, hippies versus punk, yellow versus green, and pajamas versus fancy day. These days hoped to create a competition throughout everyday, but unfortunately some feel as if there was a lack in participation this year. The yellow vs green day seemed to be the most popular, as students wished to celebrate the assembly by going all out for their class. Yellow coincided with the underclassmen while green was associated with the upperclass. The assembly seemed to take over Versus week because of the lack in spirit for the other days, but students still seemed to enjoy the whole context of Versus.

“The assembly is always going to be the bigger picture,” sophomore Grace Pytynia-Hillier believed. “Overall it went really well, other than the spirited side of underclassmen, but I think everything else was fine.”

With the assembly being that bigger picture, students and leadership hope to see more green and gold next year. However, Versus still showcased how much passion and hype students have for our school.