Procrastination Nation: An inside look at cell phone use 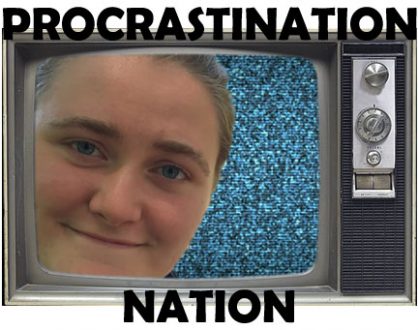 The first cell phone was invented in 1973 and looked pretty much like a brick. As the years progressed, cell phone technology improved and made the lives of millions of people infinitely easier. Now, we can stay connected to our long distance friends and family members that you can’t bring yourself to see in person. There is not a day that goes by where we cannot find a new “trend” with our smart phones. Don’t get me wrong. I love my phone, even though I drop it every 30 seconds, and I cannot image my life without my phone. But for Pete’s sake, when can you see any high school student without their phone within arm’s reach?

I wanted to see how much I was using my phone and what app I was spending all my time on. Boy, do I wish I hadn’t gone down that path, because now all I can think about is how I wasted 9.6 hours on Chrome in the past seven days, and how I was somehow on Snapchat for 4.1 hours in the span of one week. Do you know what I could have done with all this time? I could have studied for my Calculus test, or even hung out with a friend. But no, I had to spend my time doing Buzzfeed quizzes and looking up God-knows-what on the Internet. However, this horrifying fact about my own life got me wondering about other high schoolers and how much they use their phones. I took some of my friends’ and acquaintances’ phones and took a screen shot their phone use over the last seven days to experiment, and dang, high schoolers have no right to complain about never having enough time to do things.

Now, in order to keep my friends safe from shame, I am going to refrain from naming them. I can publicly shame myself for my phone use, but I will let my friends make the choice in shaming themselves. However, comparing my phone use to my good friend Allie Montgomery’s, I was proud to say I am nowhere near as addicted to Snapchat as she is. Allie spent 8.1 hours on Snapchat over the past week. I have no idea how she finds the time, but I now understand why her Snapchat score is really high.

Most of the time spent on people’s smart phones was either Snapchat or Instagram. For Grace Oh, however, her most-used app was a game called Ballz, which is just a game where the point is to break blocks with a ball, and she spent a whopping 17.5 hours on that game over the past week. That’s almost a full day. That’s commitment.

There is a spectrum of phone use, even if some high schoolers spent 10.3 hours on Instagram in one week. There are other people whose top two most used apps this week were Chrome with 2.6 hours, and News with 1.1 hours. You go Emily Swinth. I cannot imagine living without constantly checking my phone for new Snapchats.

I didn’t write this to just throw people in the spotlight for their phone use, because I think that most high schoolers use their phone for quite a bit of time. I mean, cellphones are a way to escape from your work and life, and they let you do pretty much any task to help drown out responsibilities. But try to imagine what you could get done if you didn’t have all that technology right at your fingertips. What if cell phones were only used to call and text? Some people still only use them for those purposes. What could you do with those extra 10 hours that you spent on Snapchat? Think of all the extra sleep you could get if instead of spending 9.6 hours on Netflix, you just used that time for an extra bit of shut eye everyday.

I don’t think that it is reasonable to expect people to not use the technology that is available to them. Instead, I would like to suggest that everyone step back and manage your time wisely. The process in checking your phone usage is simple. If you have an iPhone, go to settings and battery usage. This will show you your data. If you have any other kind of phone, I’m sure you will be able to find a way to figure out what you are spending all of your missing time on. But please don’t spend this precious time solely on school work. It’s your time to waste just try to waste it off your phone. I hope that you will be able to find a way to spend an hour less on your phone and instead meet up with a friend in person instead of sending them pictures.