The PTA, Booster Club, Alumni Association, the Foundation and many other donors and self-funded groups help Cleveland to fund programs and provide opportunities. 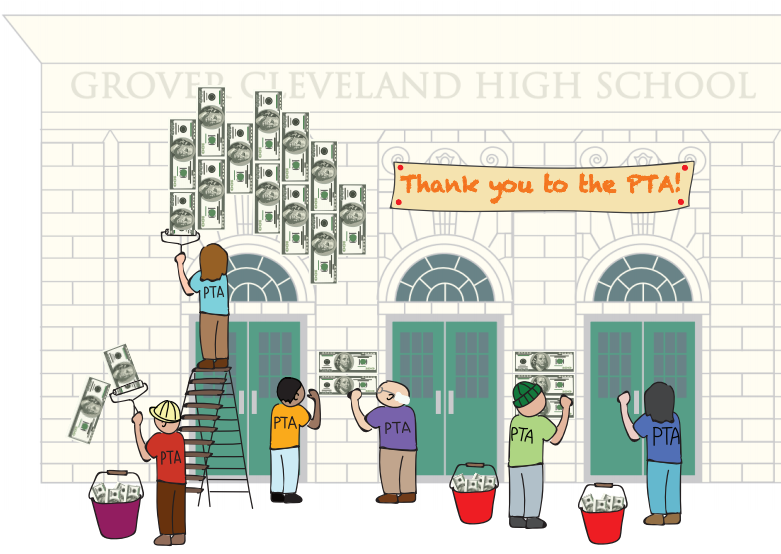 By Ashley Lytle and Bart Brewer

Public education funding has been a constant battle over the years. With a steady growth of students and the increasing need for improvements, staff, and supplies, Cleveland High School has found support within its dedicated community.

There are two main sources that determine Portland Public School’s funding. Every two years the state puts together a budget funded by taxes. In 1990, Ballot Measure 5 was passed, determining that communities could not keep their own tax revenue. Instead, tax revenue is sent to Salem where it is then compiled to be distributed. The second source is bonds and levies. They are local measures voted on by Portlanders. Money from the bonds or levies fund school building improvements.

Each organization has its own area of impact. The Cleveland Foundation’s sole purpose is to raise money for personnel salaries. Made up of a board of parents, the foundation raises money annually in numerous different ways: monthly donations, a raffle to Hawaii, the year-end campaign (done right before taxes), the sell of congratulatory ads to accompany a full page senior ad placed in the Bee and the Examiner every June, and the paddle bid during the PTA auction. This year, the foundation raised $33,000 from just the paddle bid.

The use of foundation money is determined by Cleveland’s principal. If the principal wanted to hire one full time employee (FTE), the average cost is $100,000. There’s an agreement in Portland that every foundation must give a third of their treasury to schools without a foundation. This is called “All Hands Raised.” If the foundation gives $100,000 to the school, then $33,000 must be given to the district.

The Commerce-Cleveland Alumni association gives five scholarships every year and “[lends] their support to items like kilns in ceramics, computer labs, maintenance of technology… [and] there have been individual contributions based on excellence or achievement of students that they have funded,” explained Watt. They have funded choir robes, auditorium expenses including its renovation, and marching band uniforms. Every year, they host a golf tournament to raise money to help the school at large as well as students.

For specific projects, the alumni association will reach out to alumni and ask for help. During the construction of the Cleveland fitness center, an alum from Platt Electric donated design work, electricity, and poles for the downstairs of the fitness center and at the stadium.

Cleveland’s PTA funds projects based on teacher requests. They lend support to field trip and classroom supplies, along with giving out annual scholarships to graduating seniors. Every year, they host the Cleveland auction, sell memberships, and host miscellaneous fundraisers. Currently they’re hosting a plant sale that typically makes hundreds of dollars.

There’s a “very, very, very small group of people on the board, but their reach out is big time in terms of the community at large,” said Watt. In the past, they have funded microscopes, basic school supplies such as notebooks and pencils, and the repair and purchase of textbooks.

The Cleveland Booster Club’s only purpose is to support the athletic department and its athletes. One of their goals is to help students who can’t afford to pay to play. If teams travel, the Booster club will be involved with the fundraising to make that possible. They additionally give out four annual scholarships to senior athletes at Cleveland.

The Booster Club gives out up to $500 to each team every season. On some occasions they do go over their budget. They haven’t limited themselves to just interscholastic teams, they also lend help to club teams.

The PTA and alumni association, along with the Booster club contributed to the construction of the fitness center and the renovation of the field. The community field project was an effort to get the field renovated, made possible by numerous people. In total, it cost about $2 million. This includes the Thomas Cameron Field House renovation dedicated to Cleveland alum Thomas Cameron who passed away in 2012 during a Coast Guard rescue training flight. The vast majority of the renovation was raised by Cameron’s friends along with contributions from the Booster Club, the PTA, and alumni.

The Booster Club’s goal is to support the athletes of Cleveland. Part of the money they raise is from the snack shack that’s run by students during games.

“[Football] probably played a big part of my high school career. I’ve grown up playing football since I was in fifth grade. It’s been a part of my life and so athletics means a lot to me but not only to me, to other people too. And even though it’s a high school sport, it can lead to bigger things in the future. Just giving an opportunity to youth to grow up and make big things happen, it starts at our school,” expressed senior Sione Ofa.

Funding for arts is continually talked about as lacking. Cleveland programs feel no different. “Most our funding comes from ourselves, like from revenue from our shows. We try hard to make a profit on [the theater performances] but usually we end up barely in the black,” said senior theater and choir student, Duncan Kass.

Jennifer Means is the parent of freshman Liam Means who plays for the Cleveland jazz and concert bands. Means believes that parents have a crucial role to play by volunteering and fundraising for the band program. “The band program receives zero funds from the district. Yet Mr. [Gary] Riler doesn’t charge band students/families for concerts, competitions, marching uniforms etc. Most high school band programs charge to even be in the program, as a way to cover the basic costs, but Mr. Riler wants to make sure band is accessible to everyone. So we fundraise instead, which would not be possible without parent support,” said Means.

Currently, the band program is working to create a Parent Booster group to further support Riler and the Cleveland band program.

“My son is [a] musician. These are his people, this is his passion. I want to support him so supporting the band program seemed like a good fit. I am excited to see where this program is going and plan to stay involved all four years that he’s at Cleveland,” said Means.

The band program isn’t the only art program which finds itself self-funding. The Cleveland theater program is approximately 95 percent self-funded. They raise their money through ticket sales, PTA grants, local organizations, and this year, the alumni association pitched in. Without this help, theater director Tom Beckett said they would be unable to produce annual musicals, would be without LED lights, have no light board, and have “no real modern equipment.”

Kass said, “The [theater and choir] program means everything to me. It’s been my home in high school for the past four years.”

Cleveland is able to continually thrive because of community support, as dedicated individuals continue to put their time and effort into fundraising in order to keep improving Cleveland and to provide its students and staff with the tools they need to succeed.