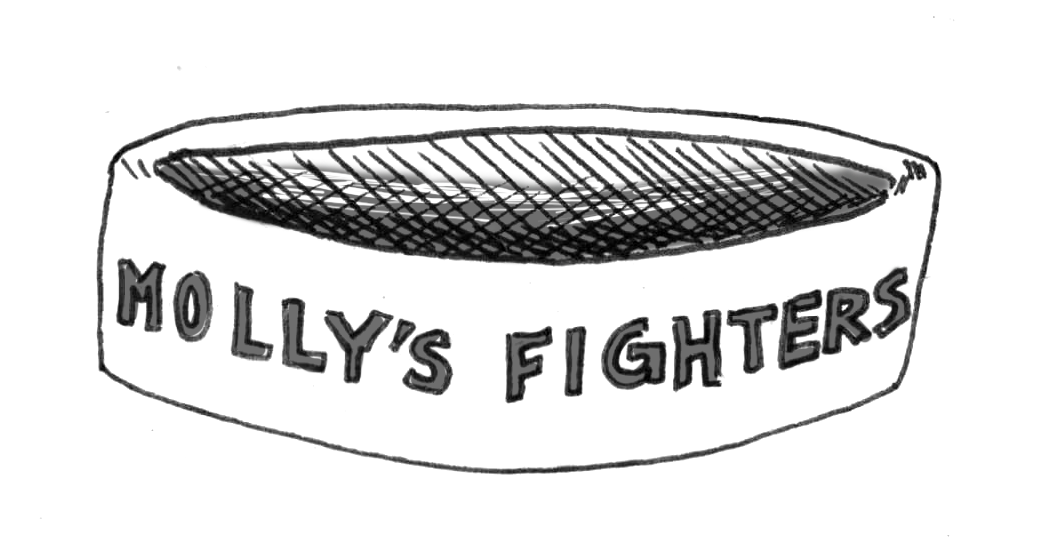 “The wristbands say Molly’s Fighters? Isn’t that a little weird?”

“Nope. Because we’re going to fight, fight, fight for Molly,” she said, punching her fist in the air like a boxer.

What do Professor X and my mom have in common? They are the only superheroes with disability parking permits. They are also both the leaders of their very own special units. Professor X, of course, is the brainchild behind the well known X-Men. While my mom, Molly Desmond Bergin, is the driving force behind Molly’s Fighters, a lesser-known task force assembled five years ago also for the purpose of good. We don’t wear matching tights or tacky uniforms, but we do all share two things in common: Matching green wristbands and a love for my mom.

On June 24, 2012, out of the blue, a blood vessel burst inside my mom’s brain, causing a stroke. The incident sent my mom on a fight for her life. My dad and brother rushed her to the hospital, running red lights enroute to the emergency room. In the backseat, she fell unconscious. I made it to the hospital later that evening. We spent the night in an empty room full of friends and relatives, waiting for the doctor’s results. I remember we all ran alongside her hospital bed, shouting words of encouragement, as they wheeled her into the neurological surgery ward. Even the nurses pushing the bed were crying. Everything felt surreal. She wasn’t supposed to make it.

Miraculously, my mom lived through the emergency surgery. What followed were seven more surgeries and six months in the hospital, including three in the Intensive Care Unit. The effects of the incident were severe. Five years later, they are still felt. My mom lost most of her physical abilities, including her ability to walk and swallow. Talking is more difficult than it used to be.

What she lost is not the remarkable part of her story, though. What is remarkable is how she responded. The first thing that jumps out at me when I think about my mom is her spirit. You would think somebody who lost so much would be a downer. Well, you haven’t met Molly. Her energy and smile can light up a room. She still brings so much kindness, politeness, and laughter. She ends every Facetime with a “peace out” and answered every little thing a nurse did in the hospital with a “thank you thank you.” She thought it was funny to add the second “thank you.” I’ve never even heard her complain.

In addition to her spirit, her work ethic is unrivaled. It is the reason why she has made such incredible strides. She has worked her tail off, every day, hours on end, for five years. If you could see the determined look on her face as she completes a session of physical therapy, you’d understand. Think of Lebron James in a Game 7 as a reference point. Then take the intensity a little higher. She truly is an inspiration, and I feel like she does not receive enough recognition. Of course, we did not handle this crisis alone. There are countless people who also deserve recognition for their help. This is why, with my column nearing the end of its third and final year, I am going to use as much Clarion ink space as possible to shine the spotlight on my mother and the Fighters she captains.

What I love most about my mom is our conversations. The first thing I do when I get home is chat with my mom about our day. I love popping into her room to see how she’s doing and unload whatever worry or thought that just flew into my head. It is a security blanket knowing she is there. She spent 24 years as a special education teacher at Franklin, but she spent the last four years as my full-time confidant, tutor, and therapist. There is nobody who understands me better. If you knew me well, you’d know I worry and talk A LOT. Still, she listens to every silly worry and every hyperactive word I say. She never tells me I’m being annoying. I share with her all my ideas and I’ve read her every Conor’s Complaints multiple times. True love. Next year when I’m off at college, it is going to be difficult knowing I won’t be able to just pop into her room when I want. I’m going to miss that. But to that thought I always remember what a wise man in a plain white T once said, “A thousand miles seems pretty far, but they’ve got planes, and trains and cars … and Facetime.”

Now to the rest of the Fighters. The squad consists of my dad, brothers, and a host of family members, friends, and the entire neighborhood of Eastmoreland. I couldn’t step outside of my house without being bombarded with concerns or inspirational messages. “Your mom’s a fighter!” Neighbors started a meal train that gave us dinners for months. “Never turn down a free meal, Bergin!” I remember one dad telling me as I tried to shoo away his offer. Everybody’s outpouring support made those first six months a lot less dark than they could have been.

The main thing the team taught me, though, is the power of comic relief. I always thought comic relief was only a thing in the movies. Nobody would try to be funny in a time of crisis, I thought. Then I actually was in a time of crisis and realized just how valuable the tool is. There was the first night in the hospital, when my mom was in a medically-induced coma, and my Aunt Katy said from beside the bed, “Don’t go to the light. And if you see Dad, don’t talk to him!” I remember my dad putting a crowd of family and friends in stitches while we awaited the end of a 12-hour surgery. Another time, a couple months later when my mom still couldn’t speak, Rick Pardini, a close friend, got a smile and a laugh out of her with the line, “I’m sorry I let Brett go streaking down the street in Idaho.” When my mom couldn’t speak, it became almost a game for everybody to try and get the biggest laugh out of her. Then there were a lot of unintentional moments that provided comic relief. My brother, Robert, a sophomore at the time, noticed one of his upperclassmen football teammates was wearing one of the “Molly’s Fighters” wristbands at practice. He asked him where he got the wristband, to which the senior responded, “Oh, you didn’t hear? Dude, some kid’s mom in the school has cancer.”

For something so heavy as my family crisis was, there were genuine moments riddled across the whole thing that showed the peculiarity of life and relationships. I feel like I aged 20 years in five. When you strip away somebody’s physical abilities, you truly get to see their personality. Mom, you are golden.