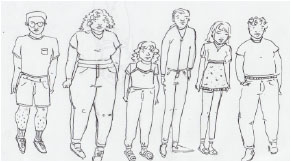 Open any fashion magazine, and you will see what the world thinks is beautiful: thin, bony, and skeletal versions of mostly young, white women. This image is not new; this image has been circulated as the consensus for accepted beauty for decades. In a society that is saturated with this sort of imagery and consumed by appearance, it is no surprise that we have created a culture rampant with bigotry. Specifically, we hate fat people.

According to a 2014 statistic from the World Health Organization (WHO), 13 percent of the world’s population is obese. According to internet trolls, obesity is grounds for the license to publicly humiliate, harass, or challenge a person’s right to live on the planet. Any person that is deemed above the “normal” weight is the immediate subject of ridicule and persecution.

Chrissy Metz, “This Is Us” actress, attended the MTV Movie and TV Awards ceremony recently. She wore a red, latex gown. Although it is true that Metz is a large woman, her attire soon became the subject of many internet trolls. Metz fired back, tweeting, “For the record, I wear what I want, when I want. News flash it’s MY body. #thankstho.” Since then, Metz has been met with praise for her courageous stance on body positivity. Unsurprisingly, her comment has also been hounded by social media trolls for “promoting the normalization of obesity.”

“She will be dead within a decade. Obese is not beautiful,” commented YouTube troll, puffwad. “Its disgusting people are glorifying obesity , that woman is UNHEALTHY [sic],” penned dwarf Swiftie Luma. “SHE IS UNHEALTHY!! SHE IS OBESE !! THAT IS THE TRUE AND SHE NEEDS TO UNDERSTAND THAT [sic],” wrote ItsMiriamCosta. To put this into perspective, these are some of the kinder comments Metz received.

These “helpful suggestions” establish the standard that it is acceptable to comment on another person’s appearance, but comments like these are not only unwarranted–they generally do not do any good. First and foremost, someone else’s body is not your business. No one has the right to comment, make assumptions, or spread hatred about someone else, much less on the arbitrary basis of body size. This false narrative also promotes a dangerous rhetoric that implies that anyone has a right to other people’s bodies. That is not just unhelpful. That is rape culture.

Internet trolls often hide behind the façade that their comments are “helping” fat people. For those who have ever justified bigotry on this basis, let me ask you: are you under the impression that fat people don’t know that they are fat? Trust me, with ridiculous media standards, personal self-esteem issues, and rude relatives, it is impossible not to know. Furthermore, fat shaming someone by arguing that she does not have a right to live on the planet does not encourage people who may have eating disorders to get help. In many cases, fat shaming actually pushes people to do further destruction in binge eating or self-harm. This societal commentary does not encourage people to lose weight; it teaches them to hate their bodies.

Moreover, fat shaming perpetuates the justification of bigotry on the basis that anyone can assume health based on outward appearance. It is impossible to judge someone’s health based on a televised photograph of a latex gown. It takes a medical degree to determine the health of a human. “Some large people are very fit; there are people who fall in the obese category, but run marathons,” said Abigail Saguy, sociology professor at the University of California at Los Angeles. You cannot know a person’s health based only on their shirt size.

Furthermore, heavy people do not “promote obesity” simply by existing and accepting their bodies. Body positivity is not about spreading the message that you should ignore your physical health; it’s about debunking the idea that everyone should hate their bodies if they don’t look like the media tells them they should. The idea that fat people “embrace and normalize obesity” is outrageous. Fat people don’t encourage obesity just by living.

According to NBC’s WCNC, 94 percent of teenage girls have been body shamed. Unfortunately, the media’s exclusive version of “pretty” (tall, thin, and white) contributes to society’s mentality of beauty in the United States, and more destructively, leases people the prerogative to quantify a person’s worth based on their weight. This fat bias isn’t just in media; according to BBC, it actually affects individual pay and hire ability. “Even when they’re able to do the job competently, obese people routinely face discrimination in the workplace. While discrimination against employees because of their sex, age, race, ethnicity, sexual orientation, religion, or disabilities is illegal in a growing number of countries, including the UK, many businesses still consider it perfectly acceptable to refuse to hire—or to fire—obese individuals,” wrote BBC.

In a recent study, scientists at the University of Exeter in Exeter, England found that if a woman was around 14 pounds heavier (based only on genetics and not on eating habits), she would have an income of $1,867 less per year than a woman of the same height who was thinner. “Society places more emphasis on women’s appearance, so one possible explanation is taste-based discrimination. Employers may be concerned that their customers consider obesity less palatable for women than for men, and want to keep obese women out of jobs requiring interaction with the public,” stated Jennifer Bennet Shinall, assistant professor of law at Vanderbilt University. Commented Enrica Ruggs of the University of North Carolina at Charlotte, “Obesity is absolutely one of the few stigmatized categories where we still think it’s OK to discriminate.” In the corporate world, weight matters.

Although many have never heard the word, this fat bias has a name: it is called weightism. We protect other groups of marginalized people based on race, sexual identity, gender, age, religion, and disability from discrimination in the workplace, yet we ignore the elephant in the room. Weight is a basis for bigotry, but according to our laws, it is not a basis to be a protected class.

Perhaps society will one day embrace individuality and intellectual merit over the size of a person’s pants. Weight does not equate worth. It is as simple as that.