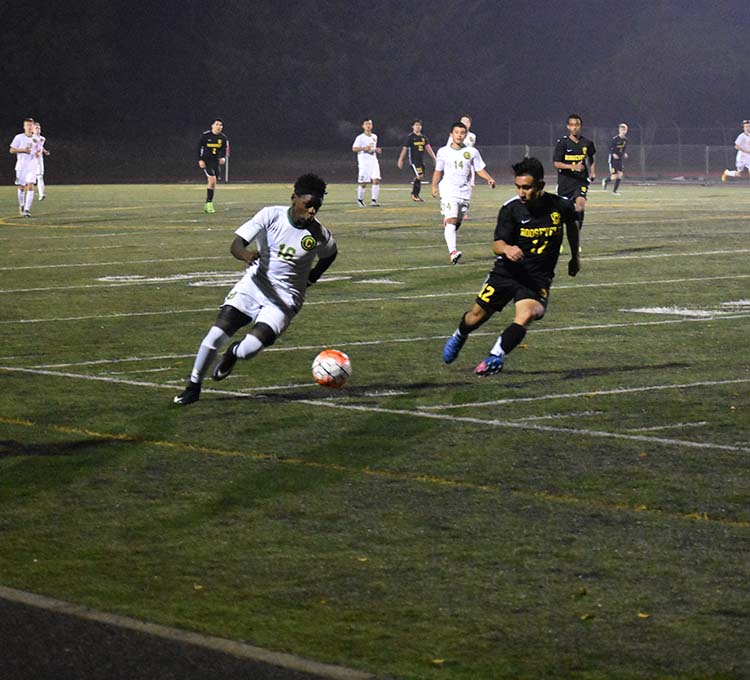 Mohammad Mohammad, freshman, takes on a Roosevelt defender in the second half. The Warriors won 3-0 on Oct. 17.

It was a cold, wet night on Oct. 17 as the Warriors beat the struggling Roughriders 3-0 in their final home game of the season.

The final home game meant that this was senior night and because of that, head coach, Nick Yoder included all 11 of his seniors in the starting XI.

The game was pretty even in the first 20 minutes as both teams had opportunities but neither could break through. In the 25th minute however, Warrior’s keeper, Dawson Davis came off his line to make a save, but that didn’t stop Roosevelt midfielder Jorge Sic Say from attacking and injuring him for the first of eight Roughriders yellow cards.

The score was still 0-0 at halftime, but five minutes into the second half, Warriors forward Paetin Nelson-Gibbons shot from distance and was able to sneak it under the diving keeper’s left hand for a 1-0 lead.

Seven minutes later in the 52nd minute, midfielder Loic Baures broke free and put it away doubling the Warriors’ lead.

Later that half, Harry Ritter-West scored for the Warriors, putting them up 3-0.