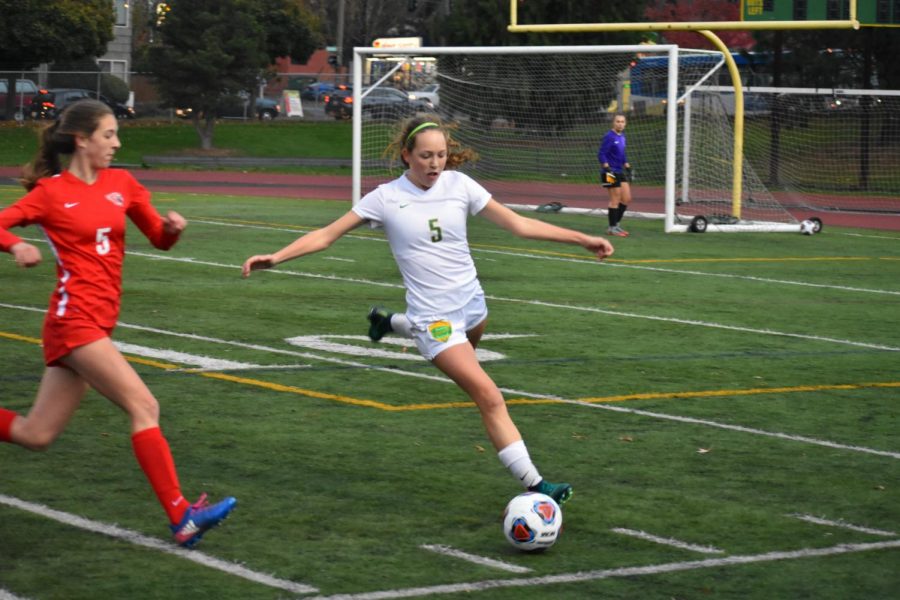 Devon Burke, freshman, clears the ball in the first half of the quarterfinal game against Lincoln on Nov. 4.

The Cleveland Warriors lost 2-1 to the Lincoln Cardinals in the state quarterfinal game on Saturday, Nov. 4, bringing their exceptional 2017 season to an end. The Warriors’ only goal came from junior Audrey Olenski.

“I told my team ‘It’s going to sting for a while, but we have lots to celebrate this year,’” Head Coach Emily Ngan said of the game.

The weight of this game coupled with the team’s familiarity with the Cardinals made this an intense matchup characterized by physical play and frantic energy. The packed stands bore witness to many stressful moments and close calls. Cleveland scored first, with Lincoln answering moments later. The Cardinals were able to find the back of the net once more before halftime, and the Warriors never recovered despite their best efforts.

“The last ten minutes we did everything we could to get the equalizer but came up short,” added Ngan. “We had some great opportunities in the game, but Lincoln had a good game plan, and they shut us down.”

The team is extremely proud of their performance this season. “Quarterfinals were a huge milestone for us,” Ngan said. “It was a great ride for our team.”

“I’m very proud of what we’ve been able to accomplish,” Olenski said. “We went above and beyond expectations.”