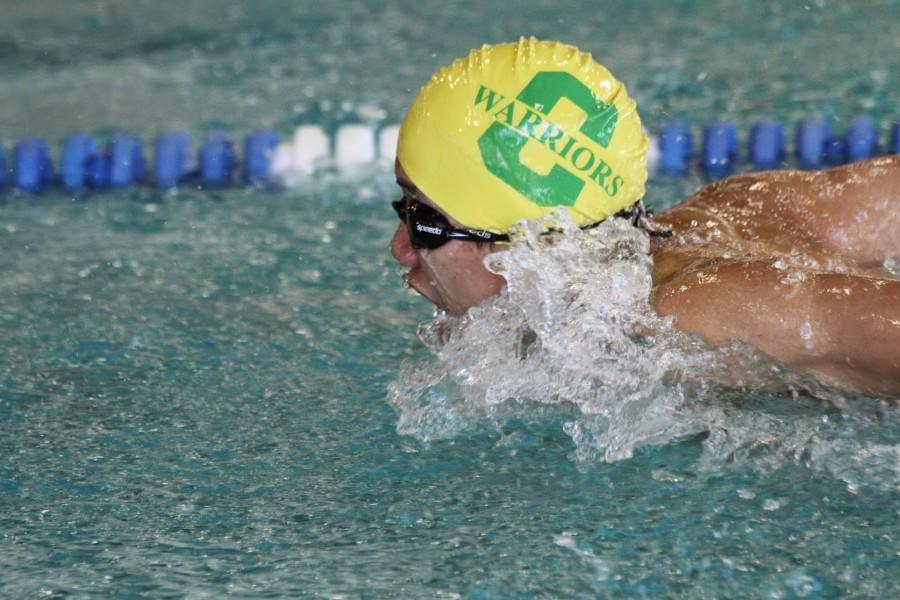 Cleveland’s boys and girls swim teams had an excellent weekend at the PIL District Championships, but it still wasn’t enough to overcome juggernaut teams from Grant and Lincoln.

“Our swimmers had personal records across the board,” said coach Mollie Starr, “and we placed a lot more people in finals than we expected.”

The boys team placed third, with 58 points, behind Grant and Lincoln who scored 76 and 63 points respectively. The girls team placed fifth, scoring 24.5 points.

Tyler Soo, junior, and the team’s biggest star, won his second consecutive 100-yard backstroke title and placed second in the 100-yard butterfly. “It was a good race,” said the ever-humble Soo. His teammates were less circumspect. “He’s a god,” said one swimmer.

In addition to Soo’s individual races, the boys qualified their 200-yard freestyle relay team of captain Tucker Johnson, Soo, sophomore Tanner Montagriff-Peck, and freshman Rees Kyle for the OSAA state championships. The same four swimmers made up the 400-yard freestyle relay team as well, which, while failing to qualify for state, broke the school record for the distance by 0.25 seconds. Their time of 3:30.43 is certainly nothing to sneeze at. The old record was set in 2011 by legendary Cleveland swimmers Alex Karter, Sam Donohue, Brandon Risley, and Steven Soo, Tyler’s older brother.

In what was surely the most thrilling race of the night, freshman Lejla Biberic tied for second place in the 50-yard freestyle with a time of 26.17 seconds. When the swimmers took off from the blocks for their two lengths of the pool, a deafening roar rose from the crowd, urging on the girls. Biberic and two other swimmers led the race from start to finish, with none ever holding a clear advantage. When they finished, the crowd hushed briefly, looking to the electronic scoreboard to learn the winner. Hushed yet excited murmurs quickly filled the building not at the winner’s time, albeit impressive, but at the unprecedented tie for second place.

“I really enjoyed my first district championships,” said Biberic. “I went out there and gave it my all.”

The boys had stronger individual showings, particularly in the backstroke. In addition to Soo’s championship, Montagriff-Peck took third and Jesse Damman took fourth.

The boys had a strong all around showing in the freestyle races, and in a random coincidence swept fourth place in the freestyle races.  Kyle took that place in the 50-yard distance, Johnson took it in the 100- and 200-yard distances, and junior Joey Henderson took it in the 500.  Additionally, Montagriff-Peck took fifth in the 50-yard freestyle, Henderson took fifth in the 200-yard freestyle, and freshman Adam Nayak was sixth in the 500.

Many of the teams strong performances came from underclassmen. “And we’re graduating ten seniors from a team of seventy,” said Coach Starr.  The future looks bright for these Warriors.