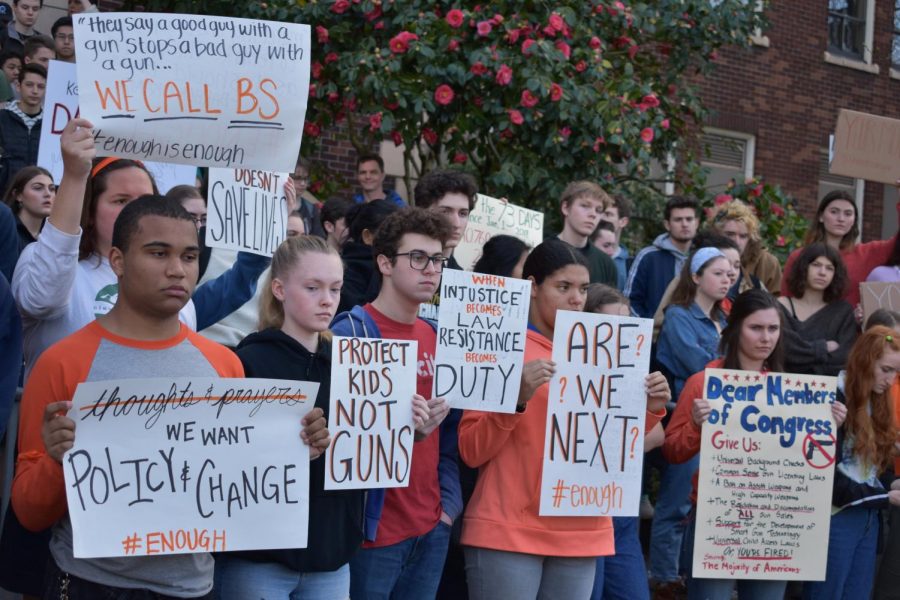 Students stand silently outside the school on March 14 for 17 minutes, honoring the 17 victims of the recent Florida school shooting and advocating for political action on ensuring safety in schools.

On Feb. 14, 19-year-old Nikolas Cruz opened fire with an AR-15 rifle at his alma mater, Marjory Stoneman Douglas High School, killing 17 students and staff and causing the ninth deadliest mass shooting in the history of the United States. On March 14, the nation demanded change: A 17 minute nationwide school walkout was held to show solidarity for each of the 17 lives lost, and call for action against gun violence.

The walkout was planned by Women’s March Youth EMPOWER, a group within the Women’s March organization, founded following Donald Trump’s 2016 presidential election. At 10 a.m. local time, students in an estimated 2,850 schools across the United States walked out of class, showing their support in demonstrations, marches, and speeches.

Cleveland participated in this movement with hundreds of students and several staff walking out of their sixth period classes. “I decided to participate because I’ve been frustrated lately with the ways that our government and that our leaders have been addressing the shootings and so I feel like participating in this was a way for me to contribute to the movement, and just raise awareness about the impact that gun violence has on our communities,” said junior Sophie Marcus.

Students lined the front steps of the building and stretched along the sidewalk, standing still and remaining silent for 17 minutes. Candles were passed out among the students standing in the front, and posters were held up throughout the crowd of students, saying things such as “Are we next?” and “Gun violence will not be our new normal.” Others also had the names of the Parkland shooting victims, or “#Enough,” which was the slogan of the walkout.

Observers, including parents, community members, and news reporters, stood across the street and took photos and videos of the students. Some cars honked when passing by, alerting students of their support. By the end of the 17 minutes, a somber feeling had spread among the student body, evident by tears being shed and solemn expressions.

“It was really powerful just to look over and see so many students standing in front of the school holding signs…I thought it was really cool how we stayed silent, and I didn’t see anyone who was distracted talking to their friends or on their phones,” said junior Macy Jenks. “I just felt really overcome by a sense of hope that our generation really values stricter gun laws and we aren’t going to put up with congress and our president ignoring us.”

Students who chose not to participate remained in their classes or proceeded to the cafeteria for the 17 minute time period. Several students voiced the concern was that it was too passive of a protest and wouldn’t make a difference, or that they didn’t feel that silence was the right way to approach the situation. Another reason of not walking out that was brought up was because it felt too structured, with administration making guidelines on how to “walkout.”

Among both students who did and didn’t walk out, the organization of this walkout created a large bout of controversy in the days leading up to the it. Senior Rosie Allison-Brown was the initial organizer. She signed Cleveland up to be a participant school on the official Women’s March Youth EMPOWER website, with the sole intention to involve Cleveland in the movement. “I realized that, had I not, the student body would be a little out of the loop and not know what the plan was, so I figured that by stepping forward and trying to organize it that could make it a little more fluid,” she said.

Principal Ayesha Freeman, Special Projects Coordinator Jan Watt, and Leadership teacher Eric Mirsepassi called Allison-Brown to have a meeting to discuss logistics of the walkout, which included safety. She explained that she wasn’t going to bring administration into the walkout, but this meeting was the point at which they became involved.

Administration set safety guidelines for the protest, saying the areas where students could and couldn’t go. Posters hung up around the school explained that students were not to stand on the Powell side of the school, as well as not cross the street.

While working with administration, student organizers agreed that safety was necessary to consider. “As the organizer of the event, and as the one working directly with administration I decided to go forward with the plan to tell students to stay on campus and not go on the Powell side just because it was a safety and liability issue, and that just received some backlash, but in the end everyone came together and it worked out fine so I think it was ok,” said Allison-Brown.

Freeman explained the role of administration when it comes to student’s safety, and how the decisions were made regarding where they wanted students to be during the walkout. “My role is to ensure the safety of our students,” she said. “Having hundreds of students potentially standing on Powell Blvd could pose a safety threat. I would not want any of our students to be hurt by fast moving traffic on Powell. This was not an effort to control, but rather an effort to make sure that students are safe. When I was at the national Women’s March in January of 2017, there were areas of the mall in D.C. where we did not march. We were given guidance and support by local officials to ensure the national march was safe and successful. It’s the same message and intention here.”

Additional questioning of this walkout came from students’ thoughts on the face of the movement. According to EMPOWER, the slogan for this movement is #Enough, to vocalize that gun violence has gone too far. However, this led to the question: wasn’t it already enough?

“Something that I was thinking about while I was doing the walkout, and something that CARE Leadership has been talking about before the walkout, is the idea that gun violence has been occuring in communities of color for generations and generations and so the idea of “#Enough” has kind of only come about in this past shooting, even though it’s been enough for hundreds of years,” said senior Caroline Diamond.

Portland Public Schools sent out a letter to families showing support of students walking out, however, this was not the case for all schools in the nation. In Texas, a school district superintendent stated that students who walked out would receive a three-day suspension. This leads to discussion of the First Amendment, which protects freedom of speech and to assemble. It was reported that the ACLU was contacted by students who were forbidden to walk out by their schools.

With so many controversies and the focus on administration, these factors can cause the message of the walkout to get lost.

“What I noticed is that while listening to different conversations in other classrooms, I felt like thinking about the victims was kind of lost, as people thought about how they were going to protest and how people were going to walkout,” said Diamond. “I felt like Cleveland forgot that this is bigger than us; this is a national thing. You can show how you’re feeling about gun violence and gun safety however you want, but it still created so much controversy that I feel like the real message of the protest was kind of lost.”

However, in the end, Cleveland appeared to put their concerns regarding logistics aside, and fully committed to the 17 minutes of protest. “At the end of the day, what’s important was that we went outside,” said junior Lainie Pennington. “We were apart of this national protest against gun violence and the legislation that doesn’t keep kids safe, and people saw that.”

See our gallery from Wednesday’s (March 14) silent walkout from  photographers: Ariel Harmon, Jaden Rapaport, Maddie Sweet, Frankie Tresser and Brooklyn Pierce. Watch for the story in the next issue of the Clarion, due to hit the stands March 20.