Drama in the Drama Department 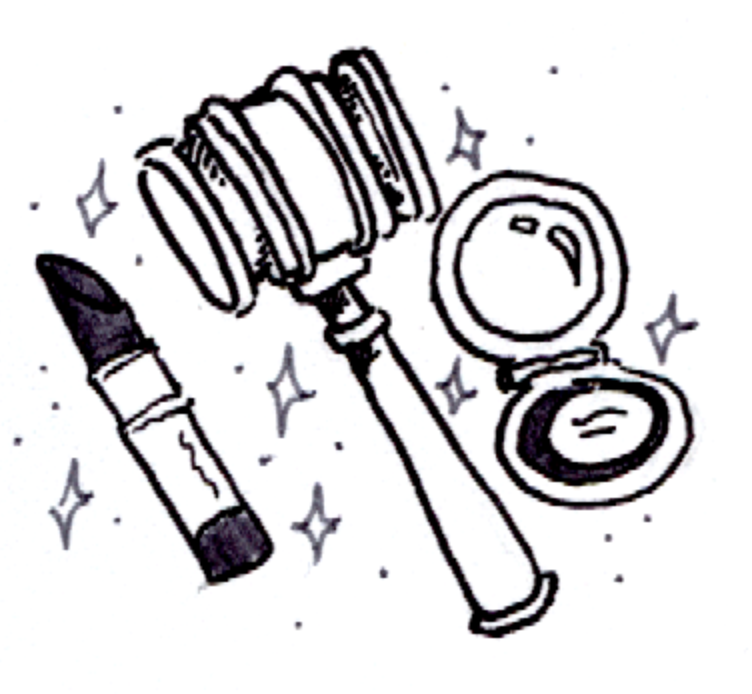 The fact that the drama department’s production of Legally Blonde hit the stage April 26 is a testament to the tenacity of the cast and crew because it literally came back from the dead.

There were, to put it mildly, some road bumps along the way to the first performance.

Originally directed by senior Claire Miles and junior Anais Lowe, the pair were in charge for two months before the unexpected departure of Tom Beckett, the Cleveland drama teacher. A week after Beckett left, retired drama teacher Jane Ferguson stepped into his position. Ferguson, the drama teacher at Cleveland for 11 years before Beckett was hired, found some trouble transitioning into her role.

“I was asked to come in and oversee the directing of the play, without much guidance from anybody. I came in and kinda made some assumptions that certain pieces were in place, and started to direct the play with a team of students and adults who had been working for many months,” said Ferguson.
Several rehearsals after she stepped in, students started to feel as though Ferguson and vocal coach Sherrie Van Hine were not recognizing or listening to the students who were in charge, and that the adults’ interactions were making students feel “emotionally tattered,” said Rosemary Allison-Brown.

Cast members soon decided it was time to bring up their concerns with the administration and scheduled an appointment with Jennifer Van Kopp, one of Cleveland’s counselors.

The students voiced their issues regarding the musical, especially the school’s method of solving the problems. The students who attended made it clear that they wanted to discuss their concerns without Ferguson or Van Hine present in order to have a safe and pressure-free environment. However, after meeting with Van Kopp, the administration decided that a restorative justice circle (a structural framework used to build relationships and address conflicts within a community) was the best course of action, and chose to include both Ferguson and Van Hine in the conversation. This decision angered the students involved because they had specifically asked for a meeting without the two adults.

The restorative justice circle commenced midweek prior to Spring Break, and both the cast members and the adults involved all had the opportunity to have a constructive conversation about the play. Afterward, most everyone was feeling more positively about the situation.

“At the end of the circle, Mr. (Nick) Yoder (counselor)  asked us to step forward if we were willing to really commit ourselves and make this show happen, and there were maybe three people who didn’t step forward. Everyone else did,” observed Allison-Brown.

However, at this point, the student directors and stage manager (Claire Miles, Anais Lowe, and Jo Prevatte) had withdrawn from their roles.

“Claire and I were very passionate about the show, and we are glad that it has continued for the sake of our wonderful cast and crew. Beckett’s sudden departure made things difficult and when a new teacher was brought on board, we discovered our style of leadership differed too greatly from hers and we chose to step down,” said Lowe, one of the student directors.

As a result, Ferguson assumed the position of director. This time, though, Ferguson would be directing with a different approach.

“The team was restructured, the student directors decided that they didn’t think that they should move forward with directing the show. I thought that I could probably do it, so I stepped in,” said Ferguson.

And then another twist.

On March 23, the Friday before Spring Break, the cast was called to the auditorium and told that the musical was to be canceled. The administration also sent out an official email stating the reasoning why they canceled the show to the Cleveland community.

In the email, Vice Principal Dr. Katy Wagner wrote in part, “We brainstormed ways to keep the show going – changing the chain of command, have clearly stated roles and responsibilities, using notes meetings to communicate more effectively, have clearly communicated call lists for rehearsals, engage more volunteers, and even postpone the show. Unfortunately, with only three weeks until curtain (and no dates in our calendar that would work should we choose to postpone) and plans to start building a set over Spring Break, we did not feel there was enough time to implement these changes and had to make this incredibly difficult decision today.”

“The auditorium just erupted with emotion. A lot of people, myself included, started speaking up against the decision because it felt as if the administration had failed us, and the way that they phrased it repeatedly, was that they were putting [the blame] on Ani and Claire and Jo [the stage manager] for being student directors,” added Allison-Brown.

“Right before Spring Break, there was a lot of disagreement and emotions and frustrations. There were a lot of people who were struggling to collaborate and work together. I think that it was all coming at her [Dr. Wagner] and she made the decision that it would be hard to have people find resolution and cooperate and have fun, so she made the decision on the Friday before Spring Break to cancel it,” said Ayesha Freeman, Cleveland’s principal, when asked about the decision to cancel the play.

“Many of us thought that the decision was made without taking into account the casts’ commitment and that was something that really hurt us. We fought for what we cared about and in the end got the beautiful show that we deserved. I can’t totally speak for the rest of the cast but I know personally I gained a lot of respect for Jane after the show was revived. We told her we were committed to this production and she actually listened. She really fought for us and if it wasn’t for her belief in our passion and commitment we wouldn’t have our show,” said Tucker Hoffman, junior.

During Spring Break, Freeman was flooded with calls and emails from students, teachers, and parents of cast members who wanted to address the play’s cancellation.

“I supported the decision, then I started to hear from many parents, students, and community members around the city that felt really passionate about the show going on. I wanted to do what was right for our students, so I took some time to think about what is best for the students and what we are capable of doing,” said Freeman.

The Monday after Spring Break, Freeman hosted a lunch meeting where she called many of the cast, production coordinators, members of the student arts council, parents and adults involved in the play to get together and talk. About 50 people attended the meeting.

“I wanted to hear from everyone to see if they were committed to having the show go on, and I wanted to hear that people wanted the show to go on and that they would work together,” said Freeman.

This soon proved to be effective, as cast members went into another meeting later that day and were told the play was back on. During which, Freeman “asked the adult production crew to ‘try,’ that was her wording, ‘please try to make it work,” according to Ferguson. “We said ‘ok we’ll try,’ and that’s what we’re doing.”

While this was a win in the eyes of the students, it also caused adverse effects. Many cast and crew members made new commitments in lieu of the play, thinking the show was no longer happening. Due to this confusion, “Legally Blonde” no longer has a live pep band and will be performed with pre-recorded music instead.

“There was a lack of appreciation among some members of the cast and most members of the administration over what we’d been doing. Now they’re using a recording because so many members of the pit quit, which isn’t nearly as fun and costs a lot of money. I think they could have kept us if they weren’t so inconsiderate. Of course, some people were really nice to us, but we didn’t see that from the adults in charge,” said Molly Long, senior, who was the concertmaster of the pit orchestra before they got rid of the live music.

Also, as close as two weeks before the show there were still roles that needed to be filled.

“It’s very hard with three weeks left asking someone who’s not familiar with any of the music to not only take on a lead role and have to learn all the choir parts but also learn all of their lines,” said senior cast member Lily Gilmore. “It took some very brave and committed people to step up into those roles.”

As the show date neared, cast members and Ferguson warmed up to each other.

“Having a drama teacher who has not only directed other plays but also other musicals have been really helpful,” said Gilmore. “[Ferguson] has basically taken complete responsibility for her actions and apologized for overstepping when there were still student directors. Now that she’s in the position of director and we know her role more clearly, she’s gained respect from all the cast.”

“This was a very long, and heart heavy process. I am still not sure how I feel about everything that has happened. I am happy I was able to make great relationships. I am just sad that during the process a lot of young adults who put their heart into making the show happen were hurt mentally and emotionally. I feel as though many things went wrong that people didn’t acknowledge, but it’s almost done and I’m happy about what I got to contribute,” said Abbie Fonseca, junior.

Freeman said that “Ms. Ferguson was, what I like to call, a ‘consummate professional.’ She took responsibility for her part.” Due to the challenges of the production and “given the situation, Ms. Ferguson has done a phenomenal job.”

The arduous work put into the show has not gone without reward as Ferguson praises the production and thinks that “it’s going to serve the students, the cast, and the crew who have worked so hard.”

With the challenges resolved, “Legally Blonde” will, indeed, open on April 26 and continue through the weekend. A complete review will be printed and posted with the next edition of the Clarion. Now, it is just a matter of supporting the Cleveland drama department.

Despite the difficulties, Ferguson believes that “it’s going to be a production that Cleveland will be proud of.”