‘The Predator’ Is A Bloody Fun Mess 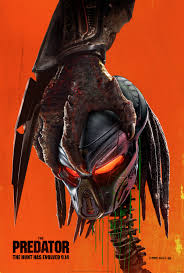 By Graham Jones and James Roach

2018’s “The Predator” is the new Shane Black film and an addition to the “Predator” franchise. In the newest installment, Quinn McKenna (Boyd Holbrook) is the single survivor of a failed government mission after a spaceship crashes into the mission region. Soon enough, McKenna is mixed up with a ragtag group of ex-soldiers and a biologist (Olivia Munn) to stop the predator from achieving its mysterious goal on Earth. Little does the team know that there is a much bigger threat coming their way.

“The Predator” (2018) immediately opens with a thrilling space chase followed by Alan Silvestri’s amazing theme song for the original 1987 Predator film. The first seven minutes of the movie seem too extravagant, and overall the film fails in multiple key areas. For starters, the characters are underdeveloped, not very likeable, and add little to the screen. Our protagonist, Quinn McKenna, is a fine hero, but his background is swept over quickly and you never seem him progress as a character. There are a few scenes that try to show McKenna connecting with his son, but they all fail because of the terrible parenting we see him perform later in the film. His son, Rory McKenna, is played by famed child actor Jacob Tremblay known for the films “Wonder” and “Room”. Rory is written as a child with aspergers, but unfortunately he ends up being one of the most unrealistic and saddening depictions of a child with this syndrome. This is specifically disappointing because Rory plays such a large part of the film, not only as McKenna’s motivation in the film, but also as the one character who knows how to use the alien tech. This is a dumb and laughable choice because it acts like all children with Aspergers have incredible intelligence and can use foreign tech with just one look at it. It doesn’t help that Tremblay gives one of his weakest performances playing the character, as he always delivers his lines in a bland, uninterested tone. Casey Bracket (Olivia Munn) is a biologist researching the predator alien. Her character is wildly undercooked and barely plays a prominent role in the plot. It’s a forgettable and underwhelming performance.

The team of ex-soldiers that assists the leads of the film are played by a variety of actors, the most well-known of them being Keegan-Michael Key, Trevante Rhodes, and Thomas Jane. This crew of characters can be summed up in one word: tropes. You’ve seen all of these characters before, the cool guy, the funny one, the awkward one, and many more cliches. This also includes a terribly offensive depiction of a man with Tourettes syndrome, which instead of being treated seriously is played up for jokes. Though the characters are tolerable and even likeable at times, they are overall very dull and forgettable.

In the 1987 original, there were tons of creative shots shown through the perspective of the predator. It added suspense to every scene and made you ask “How will they get out of this one”? That perspective differentiated it from other 80s over-the-top-movies. Shane Black’s version of “The Predator” has a lack of creative designs, only a couple of ambitious shots, and sometimes the camera isn’t even in focus.  All the gadgets and ships in the 2018 edition are ripped straight out of the previous three blockbusters. The two new ideas added in are predator dogs and bigger predators. As ridiculous of a concept predator dogs are, there was moment in the movie I thought they were pretty decent henchmen. The biggest issue I had with them was that the CGI looked goofy and unrealistic. Eventually, one of the characters whips out a captive bolt pistol (the gun used to kill sheep) and shoots one of the dogs in the head which makes it their sidekick for the rest of the movie. You could cut the predator dogs from the movie and not a single thing would change. It’s so obvious that the budget ran out towards the end of the movie because everything started to look plasticy. Unfortunately, “The Predator’s” new style is slightly below average.

Shane Black, the director, is most well-known for his work on 80’s and 90’s action films and the quippy and fast dialogue he inserts into the script. Although this film does contain some of that, I found myself at some points very disappointed with what I was hearing. There are lots of jokes get a chuckle out of you, but when they’re not adding humour, it sounds like your run-of-the-mill action-blockbuster dialogue. An instance of this is when the protagonist, McKenna, shouts the catchphrase, “Light em’ up!” multiple times. Also, we can’t forget about the scientific mumbo jumbo thrown across the movie. The good thing about the script is that it quickly moves over scenes containing speech like this to focus on the real star of this film: the action. If you can look past all the various problems in this film, I can promise you a good time. This has just about everything you could want from a “Predator” movie, explosions, gore, and most of all, lots of the predator. This film does not stray away from showing you its title character, with and without its mask on. There’s also plenty of bloody and violent deaths to appease the sickest parts of your mind and mostly exciting action set-pieces that get your heart beating and your butt to the edge of your seat. I will admit that the finale is the worst of the action scenes and leaves for a disappointing climax, but overall, when there was action on screen, I was hooked.

This is without a doubt a popcorn flick, the type of film you pop in to watch for two hours of mindless fun. “The Predator” is not necessarily a good movie, but what it has to give is still quite entertaining. The film makes up for its watered-downed characters and thin plot with captivating and delightful scenes of blood-soaked sci-fi action and absurd and silly quips thrown around by the cast. I can’t say that it’s anything that will be hailed in the future, but for now I can’t help but suggest this and claim it’s worthy of a ticket purchase. Overall, it’s dumb, stupid fun.