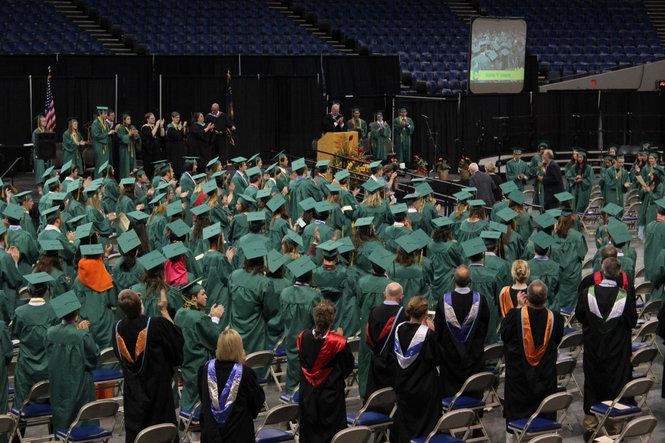 The graduation ceremony for the class of 2014.

It seems Portland Public doesn’t want to say goodbye to this year’s seniors. There has been a recent decision to add an extra day of school for seniors in order for them to meet the allotted amount of schooling.

Seniors aren’t required to meet the designated 130 hours of class time, but they have a different expectation.

“When the district put out the yearly schedule, they ended up being short on hours by one day for seniors. The hours may have been miscalculated, or they may be due to the snow day,” said Vice Principal Kevin Taylor.

The last day of school for seniors is now Wednesday, June 3. The senior recognition assembly is on Friday, June 5, and graduation is on Tuesday, June 9. As for senior finals, administrators are currently undecided on whether they will push finals back a day. On the current calendar, finals are on June 1-2, meaning there would be one more day of school after finals.

“We’re still in the process of asking teachers how they would like to handle it. That aspect isn’t resolved yet,” Taylor said.

Many seniors questioned the incentive behind the change and are disappointed that the district is imposing an extra day.

“Many seniors have family coming in town for graduation. A lot of people already have plans set,” said Katherine Dean, senior.

“It is frustrating for them to impose an extra day,” said senior Nate Raphael, co-student body president. “Truly, what is one more day of high school?”

“It’s just ridiculous and emblematic of this whole thing. I don’t think the few extra hours will add to my educational experience,” said senior Zane Smith. “It’s irritating how we’re so focused on a set amount of time.”