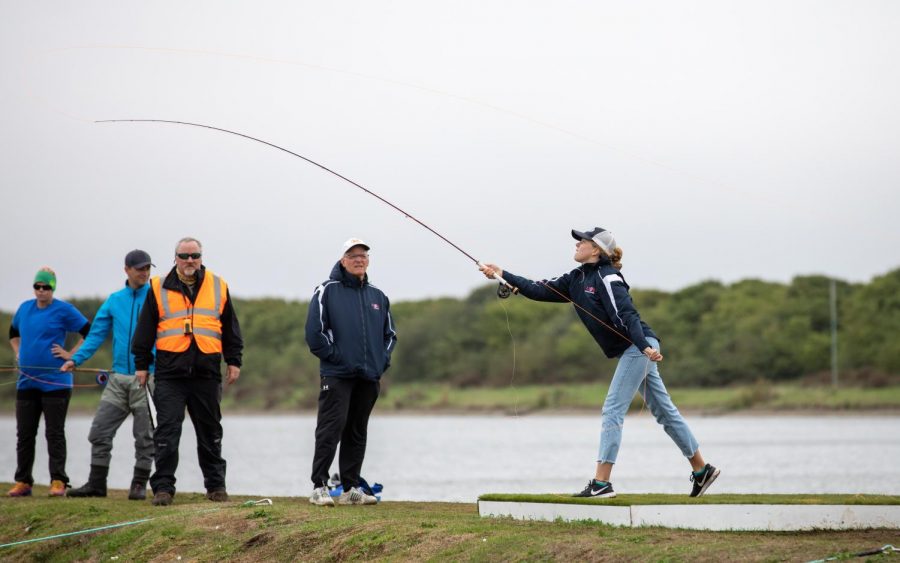 Cleveland sophomore Maxine McCormick is 14 years old and already is a world champion fly caster. She holds an accuracy world championship title, renewed in England this summer with a score of 52 points in the women’s division, a full 21 points clear of the second place finisher.

McCormick first earned a world championship at the age of 12 in Estonia in accuracy, and went to England to renew the title. The championship is held every two years in a different location and lasts three to four days. For those unfamiliar with the sport, she describes the motion of throwing the line as moving your arm up and down, “basically the same motion as when you’re running.”

Fly casting is a sport that emulates fly fishing, an angling method in which an artificial “fly” is used to catch fish. The fly is cast using a fly rod, reel, and specialized weighted line. Both fly fishing and casting are mainly practiced by people who wish to improve their fishing skills. Few elite casters, about 150 throughout the United States, choose to compete; even fewer are women. The largest demographic of people who compete are actually retired men; however, McCormick is part of a history of powerhouse female fly casting champions including Joan Wulff, “The First Lady of Fly Fishing,” and is expanding the competition. But McCormick is the best fly caster in the world.

She began fly casting at age nine when her dad took her to a club in San Francisco, where they lived up until a year and a half ago. He wanted her to try a hobby that both he and McCormick’s grandpa were passionate about. Her gift was obvious from her first time holding the rod. McCormick and her family quickly got connected with a coach, Chris Korich, an 11-time world champion himself. With his help, McCormick was outscoring all the women at many national competitions by the time she was 10.

McCormick is accompanied by Korich and her father to competitions. She explained that traveling is part of the fun in being apart of a sport like this. This year there were 22 different countries competing at the championship and McCormick bested all of them; she was a full 21 points clear of the second place finisher. After the competition, she was rewarded with a trip to London with her dad.

Over the years, McCormick and Korich have grown very close.

“My coach [Korich] is a really close family friend, he’s like an uncle to me. We’ve been working together since I was 9 and a half, right when I started. He’s also one of the best casters in the world and knows a lot about the sport,” she said.

McCormick and Korich still work together regularly. Leading up to the competition this spring and summer, she would fly down to the Bay Area or he would come up to the Pacific Northwest to prepare.

McCormick said,  “It’s mainly about technique when approaching the competition. My coach is also one of the best in the world so he showed me all of the good techniques I know.”

Over the summer McCormick worked as a CIT (counselor in training) at a fly fishing camp on Lake Shasta that she attended when she was younger. She really enjoyed working with the kids and hopes to work more weeks  next summer.

Now that the world championships are over, McCormick is taking a break to focus on school and be a regular teenager. Around Cleveland, McCormick can be seen hanging out with her friends or running track. She says that most people at school know of her title since it tends to show up in the news and isn’t something she tries to hide, but also doesn’t talk much about it with her friends.

McCormick isn’t sure what her future in fly casting holds as there isn’t much more to shoot for than the world championship.

She enjoys competing but says that it can be hard when there aren’t many other people her age involved. “Sometimes the fact that there aren’t other people my age makes it less interesting and fun and motivational for me to do, because I’m just hanging out with a bunch of older people,” she said.

Regardless of her future, McCormick has gained plenty of national attention; she has been interviewed by a host of news organizations like the New York Times and spoke on NPR, which she says is “both nerve wracking and exciting.” In September she also went down to he Bay Area to do further interviews in the fly casting community.

Whether she is fly casting or running track for Cleveland, Maxine is just a regular 14 year old who happens to be a world champion.