Modern Feminism- The Not So Cheerful Side of the NFL 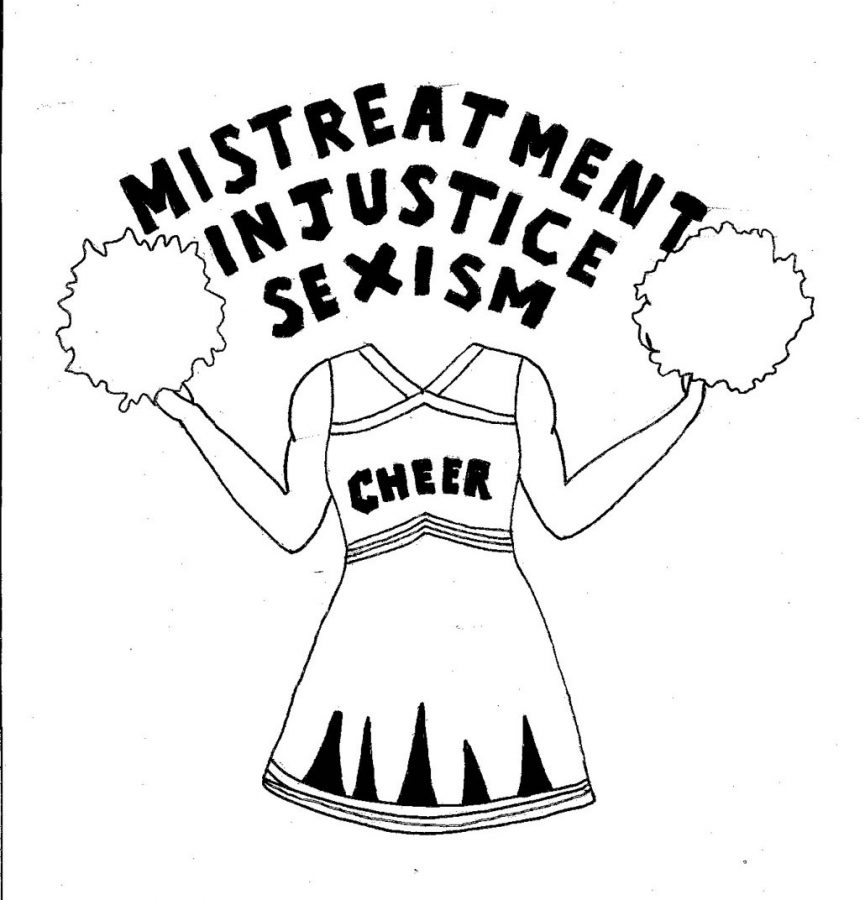 This is just one of many oppressive rules that some cheerleaders for The National Football League, or the NFL, must follow. With the NFL football season in full swing, many Americans will spend their Sundays crowded around the TV screen rooting for their favorite teams. Very few of them will be thinking about the ways in which these teams treat their cheerleaders.

The mistreatment of NFL cheerleaders seems like it should have taken place in the distant past. However, with the rise of social media, the NFL has more control over the cheerleaders they employ than they ever could have in the 1950s. Bailey Davis, an NFL cheerleader for the New Orleans Saints, learned this the hard way after posting a photo of herself in a lacy bodysuit on her instagram earlier this year. Bailey had cheered for the New Orleans Saints for three years but was quickly fired when she broke one of the Saint’s rules, one stating that cheerleaders can’t post photos that are “nude, semi-nude, or in lingerie.” Her instagram was private, due to another Saints rule that bans their cheerleaders from having a public instagram. Neither of these rules apply to the football players, who are free to post whatever they like on their public instagrams. The Saints’ decision to fire Davis seems even nastier when you consider that the outfits that NFL cheerleaders usually wear don’t stray too far from the description of “semi-nude or in lingerie.” The New Orleans Saints seem to be perfectly alright with Bailey Davis showing skin, as long as they can profit off of it.

The New Orleans Saints aren’t the only ones with regressive rules regarding cheerleaders. In fact, nearly every team has a dark history of treating these women poorly. The average NFL player makes slightly over two million dollars a year, while cheerleaders are lucky to even make minimum wage. The Milwaukee Bucks settled a lawsuit with former cheerleader Lauren Herington after the team failed to meet basic fair labor standards. Including practices, cheerleaders on the Bucks were paid an average of three to four dollars an hour, significantly less than minimum wage. The Oakland Raiders were sued by their cheerleading team (The Raiderettes) after the team was being paid below the legal threshold as well. They often faced fines if they brought the wrong pom poms to practice and could even be docked an entire day’s pay if they forgot their uniforms on game day. And despite the fact that many of these women work for the NFL 30 to 40 hours every week, they are often still considered “independent contractors.” In many states this allows for them to be paid less and to be granted less benefits. Many cheerleaders are even required to pay for their own uniforms which can cost upwards of hundreds of dollars.

Not only do many of these football teams neglect to pay their cheerleaders legal wages, they also impose harsh rules and regulations that infiltrate nearly every area of their lives. New Orleans Saints’ cheerleaders are not allowed to be in a restaurant or establishment that any NFL player is also in. They also have to block any NFL players from following them on instagram, despite the fact that there are nearly two thousand of them. Cheerleaders for some teams, like those on the Baltimore Ravens, must go through regular weigh ins. According to the Baltimore Ravens cheerleading handbook “failure to comply with body weight and or appearance guidelines can result in team or game days suspensions.” The appearance of these cheerleaders are under constant scrutiny to the point of ridiculousness, some teams even going so far as to banning cheerleaders from wearing sweatpants in public.

When female employees break these rules, the punishment can be harsh, like in the case of Bailey Davis. But football players are rarely given these harsh punishments, even when they’re known abusers. After a video surfaced of Baltimore Ravens’ player Ray Rice hitting his fiancée in an elevator, he was originally only suspended for two games. Baltimore Ravens owner Steve Bisciotti had this to say about Rice, “He’s just been lauded as the nicest, hardest working, greatest guy on the team and in the community. So we have to support him. I think we’ll be rewarded by him maturing and never putting himself in a situation like that again… If we’re all one strike and you’re out, then we’re all in trouble.” It’s too bad that only abusers are seen as worthy of second chances in the NFL, and not women like Bailey Davis.

The treatment of women in the NFL looks like a feminist nightmare. But feminists don’t have a good track record when it comes to how they treat cheerleaders, given that cheerleaders have gotten little support from feminists in the past. Cheerleading comes with a whole host of negative stereotypes, including that they are superficial, lack substance, and are undoing years of feminist progress. But many of these women are extremely talented and passionate about what they do, coming from backgrounds in tap, jazz, hip hop, or ballet. Women are seen as perpetuating negative stereotypes when they participate in the stereotypically feminine, whereas men rarely get any pushback when they participate in the stereotypically masculine. “I hear a lot that cheerleading is not a sport,’ said Cleveland varsity cheerleader Morgan Price. “We’re not treated as equal even though we practice just as much, we do the same conditioning, we uphold the same standards as everyone else does. Just because we’re wearing short skirts, that doesn’t negate the effort we put in.” The negative stereotypes about cheerleaders are not only false, but harmful. When people internalize the idea that cheerleaders are airheaded, dumb, and nothing more than a pretty face, they are more likely to objectify them. When feminists internalize this message they are less likely to stand up when cheerleaders are treated like second class citizens.

When these women stand up for themselves, they are told that they are expendable and can be easily replaced. They’re told that the intent of many of these harsh rules and regulations are to “protect” them from unwanted sexual advances. However, it seems as though the true intent of these rules is to completely control the bodies of women, even when they’re outside the workplace. NFL football players don’t have to follow any of these rules and regulations. They’re free to pursue cheerleaders if they want to, free to enter a restaurant or establishment even if a cheerleader is there, and free to follow them on Instagram. It’s up to the cheerleaders to reject, leave, and block. And if they don’t…their jobs are on the line.