Cleveland's own Jan Watt has been at the school serving in just about every capacity since 1968, and there is no sign of slowing down 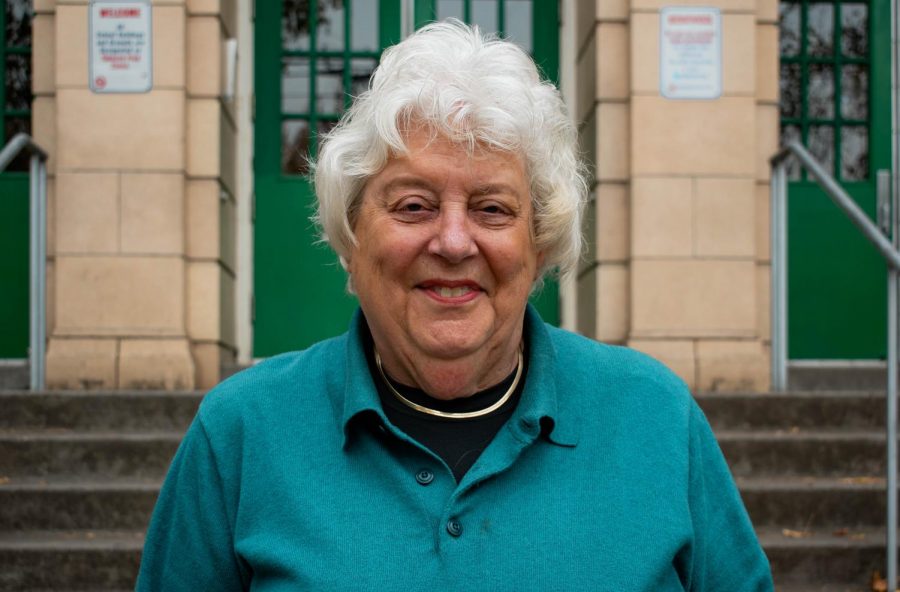 You may know Jan Watt from the hallways, assemblies, Bridging the Gap, or simply because she’s Jan Watt. She’s retired but works full time, and even overtime, as the Special Projects Coordinator, doing anything and everything that needs to get done. Before 2003, she taught for 34 years at Cleveland. Combined with her retirement work, Jan’s tenure at Cleveland hit 50 years in June, by far the longest at the school, or any single school in the district. Every person associated with Cleveland in the past 50 years should know who she is, but few know the whole story.

A local Oregonian, Jan was born and raised in Portland with a family made up of her mom, dad and younger brother. She was close with both of her parents and grandparents and said family had an important impact on her childhood. “I was very fortunate that three of my grandparents were alive when I was young. They were obviously a big influence on my life. We were a little bit like the Brady Bunch in terms of just a solid nuclear family,” she said.

Jan was particularly close with her mother, who lived to be 96 and only passed away about a year and a half ago. “There is definitely a void in my life without her,” she said.

She grew up on Stark Street across from Peacock Lane, and spent her days going to Laurelhurst Park with the kids in her neighborhood, even becoming friends with the park directors and the maintenance man, Andy. As she puts it, “Laurelhurst Park was my hangout. I could leave home at 8 o’clock, go to the park, go home and go back to the park and no one ever had to worry. Kids in my generation genuinely spent our lives outside. It was a really good time to grow up. It’s an era I wish we could get back.”

Jan attended Glencoe Elementary and Washington High School, both in PPS, and was very social and active in her community. In her junior year of high school, Jan ran for student body vice president. At this time in her school, this was completely unheard of. She was the first female in the history of Washington High School to ever run for a student body position. She remembered when the vice principal signed her application she said, “Now don’t get your hopes up.” Jan gave her speech with confidence and won the election hands down. She said, “I was very aware that no female had ever run before. I ran against a guy who was a good friend of mine and he thought he was gonna kill me. He thought, ‘This is no contest, nobody’s gonna vote for Jan’ and I crushed him!”

In high school, Jan also discovered what would become a lifelong passion for journalism. Jan said, “Newspaper was my lifeline. I was editor-in-chief for two years. My sophomore English teacher taught me how to write, taught me how important it was to know how to write, and told me I needed to take journalism. She was strict, everyone was scared of her, and she was one of the people I admired most.”

After graduating high school at 16, Jan went on to study at Portland State University where she was the editor of the newspaper as well as a journalism minor. Initially, she had wanted to go University of Oregon, but this was during the Vietnam War and many of the professors were on strike protesting, so it was taking students an extra year to graduate. Jan was putting herself through college, and she was not willing to wait around, so she went to PSU for the sake of time. She knew she wanted to be a teacher and graduated at 20 with a degree in Social Sciences. By the spring of her senior year at PSU, she had landed a job as a new teacher at Cleveland High School, the beginning of a great era. To many, Jan is the glue that holds Cleveland together.

To sum up the legacy that Jan has imprinted on Cleveland, she says, “I know what my reputation is. I know I’m viewed as somebody who’s a hardass. I come across that way because I have expectations and standards. I knew that I could be demanding as long as I was fair and that’s my mantra.”

Health teacher Camille Adana, who had Jan as a teacher said, “She scared the absolute s— out of me as a student, but I loved her for that because she’s the queen of accountability. I appreciate that she’s still here today implementing values of organization and time management. I think she’s pivotal. If we didn’t have that we would be a very broken school.”

AK Peterson, Cleveland health teacher and another of Jan’s students and friends said, “Jan Watt is the kind of educator whose passion and loyalty to the Cleveland students and teachers is rivaled by none. She seems to know how to bring out the best in each of us, as we all will rise to high expectations if someone is there to hold us accountable.  Jan Watt is more than just a typical educator.” Commenting on Jan’s ability to make connections Peterson adds,

“She reminds us, not just how important education is, but also how important it is to be a moral and respectful person.  In that way, Jan Watt teaches us all the most important lesson in school: how to be an extraordinary human being.”

Senior Audrey Olenski says that Jan has had an important impact on her time at Cleveland. She says, “My family has always been involved in the Cleveland community and I have known about Jan for a long time. She was definitely always idolized by everyone and I got to know her better as I came to Cleveland and she has always made me feel welcome.” According to Olenski, “She needs to write her book of secrets, because after Jan leaves this school is going to fall apart and Jan has so much knowledge of everything about Cleveland.”

Jan began her 51 years and counting at Cleveland at age 20 in the fall of 1968. The first four years she was at Cleveland she was going to PSU in the evenings to get her masters degree. She became the newspaper and yearbook advisor while also teaching English. In those days she was only two years older than some of the students she was teaching, and constantly got asked for her hall pass.

Kari Freeman, retired math teacher at Cleveland, has known Jan for nearly all of this time. She says, “I met Jan in the fall of 1969 when I was a freshman at CHS. My brothers and sister and my husband were all students there at the time, as well. I had many, many friends that were on her staff and took her classes. My siblings and husband all took journalism from Jan and were staff writers for the school newspaper.”

In 1997, Freeman returned to Cleveland as a teacher and was able to reconnect with Jan. They liked to joke about Freeman never being on newspaper. Freeman says, “I always gave her a bad time about how I wasn’t good enough to be on her staff, although all my friends and siblings were. Many years later she surprised me at lunch with a ceremony initiating me into the newspaper staff and making me an honorary member. She had my husband come from his work and others show up at the lunch. She had a certificate, photos, etc. It was hilarious.”

These personal connections are a huge part of what Jan is known for.

Over the years Jan has participated and assisted with most of the things there are to do around Cleveland. She became the first women’s basketball coach and eventually dropped yearbook to teach economics. She was the assistant athletic director, senior class advisor, and much more, although newspaper was her heart and soul. “It’s always been an around the clock job for me,” she said.

Jan has made countless connections with people who have been apart of Cleveland’s community in the past 51 years and stays in touch with many.

Adana considers Jan to be one of her closest friends. To her, the connection with Jan feels very interrelated because she has gone from having Jan as her own high school teacher to working with her as a colleague. Jan encouraged Adana to graduate from high school and pursue a college degree and Adana became the first in her family with a high school diploma.  She says, “This is 21 years of me being at Cleveland, which is how long Jan has been in my life and she is my friend and my family and she can joke with me and be condescending, but she loves me and I trust, respect and value her more than I can say.”

Senior Nick Paesler, who is close with Jan as well says, “I think Jan is Cleveland for me. Working with her over the past four years has been the center of my high school experience and she is the core of Cleveland. She has respect for every single student in this school and is here voluntarily every day and nobody has any idea of how much work she actually does.”

Overall, the thing that has always drawn Jan to Cleveland is the kids. Olenski says, “Jan can get a bad reputation in the beginning, but what I love about her the most is that everyone starts off on her good side and you have to do something to change that. She really does love and appreciate students. I feel lucky to know her and she is always there for me. It can be hard to have that sort of connection with staff in a big public school like Cleveland and I appreciate how supportive she is. It’s not a front she’s putting up, she genuinely cares about your future and success and the person you’re becoming as a member of society.”

She is dedicated to helping each individual student be the best that they can be. Paesler says, “I think she’s the one adult in this building that wants to know every kid’s name.”

Jan has always been an advocate for student voice and is here to help anyone who needs it. “I love kids this age and I am so sympathetic for the way you guys have to balance everything. Social pressures, academics, family, expectations, work, future, friends, I get all of that, I have lived all of that. I have always said that this job is crazy, it’s too much work, but if I couldn’t work with kids doing it, forget it, I’d be out of here,” she said.

Jan Watt is our living breathing history of Cleveland High School and we are so lucky to have her.