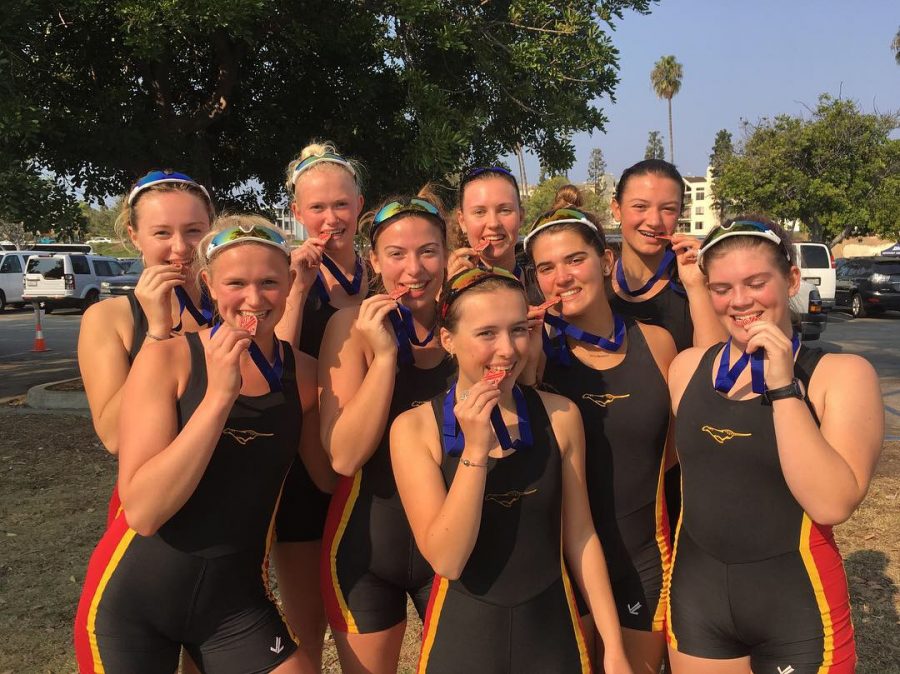 After years of hard work and dedication to rowing, senior Rachel Miller is committed to Stanford University as a coxswain.

The coxswain is a unique role. While Miller doesn’t physically contribute to the boat as a rower, she serves as a sort of coach to the eight rowers who sit with their back to the front of the boat and face her. She has to think about everything they aren’t supposed to be thinking about. This includes steering, currents, obstacles, what her coach wants her to do, the goal for practice, technique and more. For races, Miller’s first job is to execute the race plan and second is to motivate her team.

In the fall, when her team competes in head races, Miller has to make sure her boat takes the most direct and advantageous route to the finish because poor turns add meters to the race. She also has to determine the stroke rate (strokes per minute), the race plan, and the rhythm.

In seventh grade, Miller started rowing on a Lake Oswego team off and on. She fully committed to the sport when she joined Rose City Rowing as a freshman. She had played volleyball beforehand, but decided to invest more time into rowing because she loved the sport and the community.

“I think with rowing I just found another family,” said Miller. “The community is so inclusive and everyone has one common goal. When you work together to get that goal it really bonds you together.”

Miller also thinks that rowing helped push her out of her comfort zone.

“I was just that shy, insecure middle school girl and then they were like, ‘Ok, you are going to lead these high school boys,’ and I was so intimidated. It forced me out of my shell and so it really helped me develop into who I am today,” she said.

Miller reached out to Stanford because she knew she wanted to compete on a Division 1 team and attend college on the west coast. She emailed the recruiting coach, Kelsie Chaudoin, and eventually called her.

“She hadn’t gotten back to me so I just called her out of the blue,” said Miller. “It was one of the scariest things I’ve ever done, but she was so nice about it. We started the recruiting process and then she came out to a practice.”

Miller’s Rose City coach, Nick Haley, also advocated for her and helped with the recruiting process.

Miller’s talent as a coxswain was also recognized by Fox 12, who did a TV interview with her over Thanksgiving break. She learned about the information right after having dental surgery.

Haley told her, “I hope your swelling is down by Tuesday because you have a TV interview.” Her swelling wasn’t down and she said that the station had to do voice overs.

Miller said the whole process with Stanford and the television interview was very surreal.

“To see people’s reactions and see how happy they were for me reminded me of how lucky I was and to have this opportunity, and that I actually deserve it,” she said.

Miller is also in the International Baccalaureate Diploma program at Cleveland. With practice six days a week for two and a half hours, she has to manage her time well. She stays on top of deadlines and makes sure she is productive with the small amount of free time she does have and recognizes the positive impact of good sleep. In college, Miller wants to study environmental science and possibly incorporate that with sustainable business.

Lynne Gardner-Allers, Miller’s Social and Cultural Anthropology teacher, said, “I think she is a really strong student. She’s always been a good academic participant, focused, driven. I think one of the most interesting qualities, too, is that she’s a good listener and sometimes people don’t necessarily listen to what other people are saying, but I’ve noticed that she’s very patient and likes wanting to hear what her peers say when we are having academic discussions.”

Miller’s passion and love for her sport is evident, and she speaks highly of her teammates. “The reason I do rowing is the quality of people who do it. In my opinion it is one of the hardest sports out there along with wrestling and water polo, but I think the people who do rowing are such high quality people. That is what motivates me to be better and contribute to the team,” said Miller.