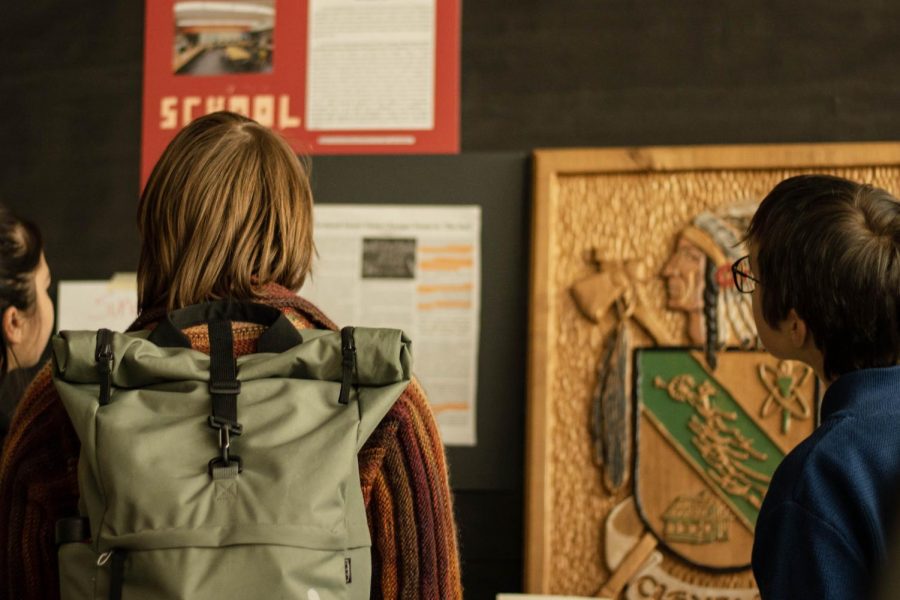 Students read about Cleveland's own history of native American appropriation.

In November,  the Cleveland Alliance for Racial Equity (CARE) class examined the persecution of and discrimination against indigenous peoples in America. In the Indigenous Heritage Exhibit, they focused on Cleveland High School’s past and present cultural appropriation. CARE had two aims: to show oppression on a national level and cultural appropriation on a local level. In the 19th century, the school’s namesake President Grover Cleveland had a hand in forming reservations and disenfranchising Native Americans. The legacy continued here on the local level through the school mascot and the names of school groups.

Currently on view in the library, this exhibit also compared the past abduction of Native American children into government operated boarding schools and the current separation of families at the U.S.-Mexico border. Students were enthused by the opportunity to learn more about Native American history as well as current issues Native people face. The Indigenous Heritage Exhibit opened two weeks before Thanksgiving, which provided students with a new perspective on this controversial holiday, as well as celebrating Native American History Month.

The exhibit was led by CARE member Nia Williamson, a senior. Williamson, who is from the Nez Perce nation, has been a passionate advocate against Cleveland’s cultural appropriation. Last year, Williamson and her cousin, Larae Ellenwood (since graduated) fought to change the name of the Cleveland dance team. This year, Williamson was a major organizer of this event.

“In CARE, we really felt it was necessary to educate our school’s population because we weren’t really feeling like the curriculum itself was doing enough for indigenous heritage,” said Williamson. “We also wanted to specify Cleveland’s history with the indigenous community and cultural appropriation. We wanted to address how historically, Grover Cleveland, who our school is named after, actually contributed a lot to selling the land and creating reservations,” she added.

This sentiment was shared by senior Lily Beeson-Norwitz, another CARE member. “We wanted to decolonize Cleveland, and what that means is we wanted to take away the colonial mindset and really acknowledge that we have that bias within our history,” said Beeson-Norwitz.

This indigenous heritage event was very well attended, surprising Williamson. “I was really worried,” she said. “Last year, we had an event during flex where we had all these clubs come together and teach about issues, and we had a very small turnout.” Williamson said.

This year, CARE found support from both students and teachers. “I was so surprised that so many people came, and I’m really grateful that the HOTA (History of the Americas) teachers assigned it as extra credit, because then we had a variety of kids coming,” Williamson said.

The exhibit specifically sought to show the impact of cultural appropriation and the systemic discrimination against indigenous people both in the greater United States and at Cleveland.

Using a lot of original material, the exhibitors tried to reiterate that Cleveland has had a long history of appropriation. Old photos of past Cleveland students protesting the name change of “The Indians” to “The Warriors” were displayed, with one student holding a sign that said: “We are proud to be the Indians.” Past yearbooks showed images of Cleveland students wearing Native American regalia at sports events.

The former Cleveland crest was also presented. It depicted a Native American man in profile, and was embellished with traditional Native weaponry. This usage of old media illustrated Cleveland’s history in a real and visceral way.

Hands-on learning was integrated into the exhibition by including open ended questions for students to answer. The prompts ranged from “Is this appropriation or appreciation?” to “How does gender play into the image of ‘The Indian?”

“We received a lot of nice comments and thoughtful questions,” said Beeson-Norwitz. “We read over them last class and it was really helpful for us to know whether this was a good, restorative thing or not,” Beeson-Norwitz said. The comments showed that students were receptive to the exhibit, and took advantage of the opportunity to reevaluate what they knew about Cleveland’s history of Native appropriation and Native American history in general.

“These comments showed that students want to educate themselves, and it reinforced our decision to put a permanent indigenous history display in the library,” said Beeson-Norwitz.

Despite this recent triumph, Williamson believes more work needs to be done to integrate Native American experiences into the classroom. “I find it disturbing that there is a lack of Native presence in the curriculum, especially in social studies,” said Williamson. “And the fact that when it is brought up, it’s like it happened 100 years ago. It’s very non-inclusive with indigenous people today,” Williamson said.

Beeson-Nortwitz agrees. “A really good place to start is having dialogue, and I think a lot of people are very afraid of having dialogue,” said Beeson-Nortwitz. “I’ve witnessed even myself becoming really defensive when people are making claims I think are false or uneducated, and I think we just really need to understand where we are all coming from, and that’s a really great place to start,” Beeson-Norwitz said.

Williamson is working to bring more attention to the indigenous community with events like this. “The Native community represents a very small portion of this country’s population,” said Williamson, “and a good 50 percent of them are isolated in reservations and are deliberately oppressed so it’s hard for us to speak out against these mascots and against all these issues and the ways we have been oppressed,” Williamson said.