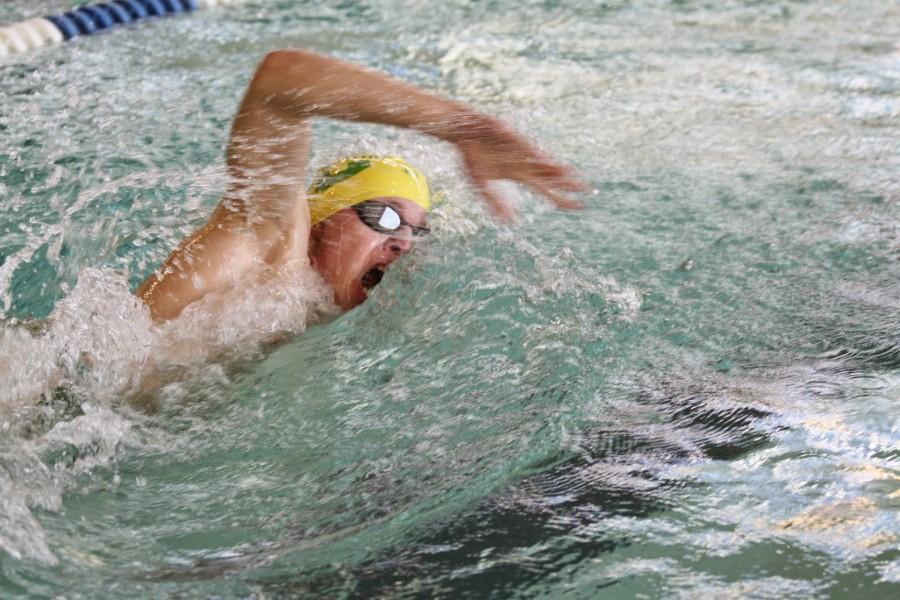 Tucker Johnson at the 2015 PIL Championships.

I qualified for state as part of the 200-yard freestyle relay team. The four of us, Rees Kyle, Tanner Montagriff-Peck, Tyler Soo, and I would be the only Cleveland swimmers to race in the meet, though we brought along four alternates as well.  Even though I know that I am one of the slowest guys at the meet, it is a validation of the many years I have spent in the pool, training.

The first day of the meet, Friday, we had to be at the Mount Hood Community College Aquatics Center at 7 a.m. We all jumped into the freezing cold water –– the temperature supposedly optimizes performance, but we’re convinced it’s just there to torture us –– and swam our warm up laps.  In the past, going to the state championships was rather intimidating.  Sophomore year, I was easily the shortest, skinniest and slowest guy at the pool, but I guess I’ve grown up a bit.  In my racing speedo, I blended in with the other swimmers.

Cleveland’s first race of the day was Tyler’s 100-yard butterfly. I squeezed in between Tanner and a guy wearing nothing but his team speedo and a purple swim cap, and stood on tiptoes to try to watch the race from poolside. I was screaming Tyler’s name so loud I went hoarse, but he probably couldn’t hear me at all.  He did well enough to earn the sixth seed the next day, the last into the championship final.

After Tyler’s fly race, it was time for our relay. Tanner swam first. When he hit the turn, I stood up on the block and waited. As he spun towards me, his arms throwing up an ocean’s worth of spray, I had a bit of an existential crisis. This is the peak of my athletic career. He touched the wall, and I dove in, arms spinning as fast as they could go.  Time slows down when you’re sprinting, and I had to squeeze my eyes tight to push through the pain of the first 25 yards. I hit the wall and flipped, my feet pushing off the wall before they even touched it. I surfaced, and took my first breath of the race. I flew. My hand smashed into the wall, and Rees dove in over me. I tore my goggles off and clambered out of the pool. After Rees, Tyler swam our anchor leg. We did 1:33.75, the scoreboard showed us in twelfth. We qualified for finals!

Tyler swam his backstroke race, and the team went out for lunch. We had dim sum at some place on Division, in the shadow of I-205.  Justin Kwong, one of my co-captains and an alternate for the relay, led the charge for us, ordering heaping platters of fried rice, dumplings, noodles and chicken feet in perfect Chinese. We were celebrating.

Turns out finals aren’t that different from prelims.  You still show up early, and the bleachers are only slightly less overcrowded.  Tyler improved a place in his 100-fly, taking fifth overall.  We stood in awe of his shiny medal before warming up for the relay.  We went a little bit slower on Saturday than Friday, 1:34.09, and took twelfth overall.  After that, Tyler took eighth in the backstroke, and our season was over. I can’t believe it all went by so fast.