The 2020 class includes five individuals and a whole team who are celebrated at the Hall of Fame Game on Feb. 21 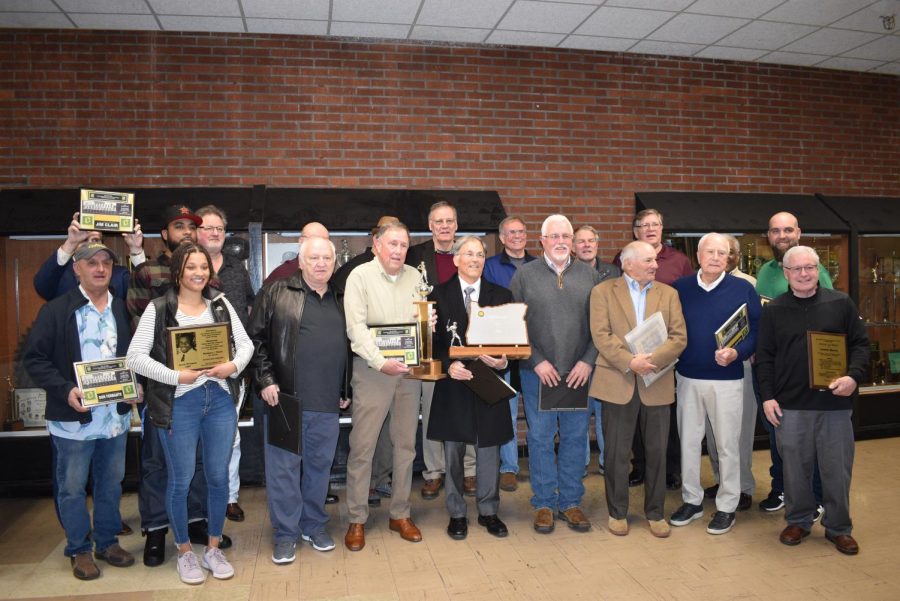 Members and representatives of the members of the 2020 Hall of Fame class, inducted on Feb. 21.

Cleveland welcomed five new inductees, along with an entire team, to its 27-year-old Mel Krause Athletic Hall of Fame on Friday, Feb. 21 in between the boys and girls varsity basketball games.

This Hall of Fame was created in 1993 to honor outstanding athletes and coaches from Cleveland, including those who showed their extraordinary athleticism after graduation. The faces of the hall can be seen every day hanging on plaques above the faculty lounge. Inductees have come from graduating classes as early as 1926.

Mike Gilgan, who couldn’t be present and was represented by Jerry Grover, was remembered for his contributions to high jump, discus, javelin, football, and most of all wrestling. He was a district champion who was in part responsible for Cleveland’s varsity wrestling team that scored 25 consecutive victories.

Allan Peterson, represented by his sister Akira Peterson and good friend Erik Geske, was active in football, wrestling, baseball, and track. He, too, was instrumental in a key wrestling championship, and was a three-time PIL champion. He was also voted student body president in his senior year, and was a talented vocalist for A Cappella and ClevelandDAIRES.

Taylor Avritt moved to Portland just two years before he graduated, but made a name for himself as a star athlete and outgoing individual in his 2007 graduating class. He participated in both varsity track and football, and was the state’s leading rusher in football in the 5A and 6A classifications. He currently lives in Dubai and has been competing in the United Arab Emirates football league as a player and a coach. His father Odis Avritt, who represented him, has also been inducted into the Cleveland Hall Of Fame.

The entire 1967 varsity baseball team, coached by Jack Dunn, was inducted. The team were the first city champions since 1931, and took second place in state. Fifteen members were present at the induction ceremony.

Last but not least, Lonnie Beach, a teacher, counselor, coach, and athletic director from 1979 to 1995, was given the 2020 Award of Merit. Beach co-founded the very Athletic Hall Of Fame he’s just been inducted into, and co-supervised the construction of the Cleveland Stadium. He also fundraised the Cleveland Athletic Department out of disaster when a state budget crisis nearly obliterated PIL athletics.

Special Projects Coordinator Jan Watt welcomed each new member with a brief speech covering their achievements at Cleveland and after it. Each inductee (or their loved ones representing them) received a plaque with their name, face, and athletic area of achievement, which will soon be hung in the second floor hall with the previous inductees.