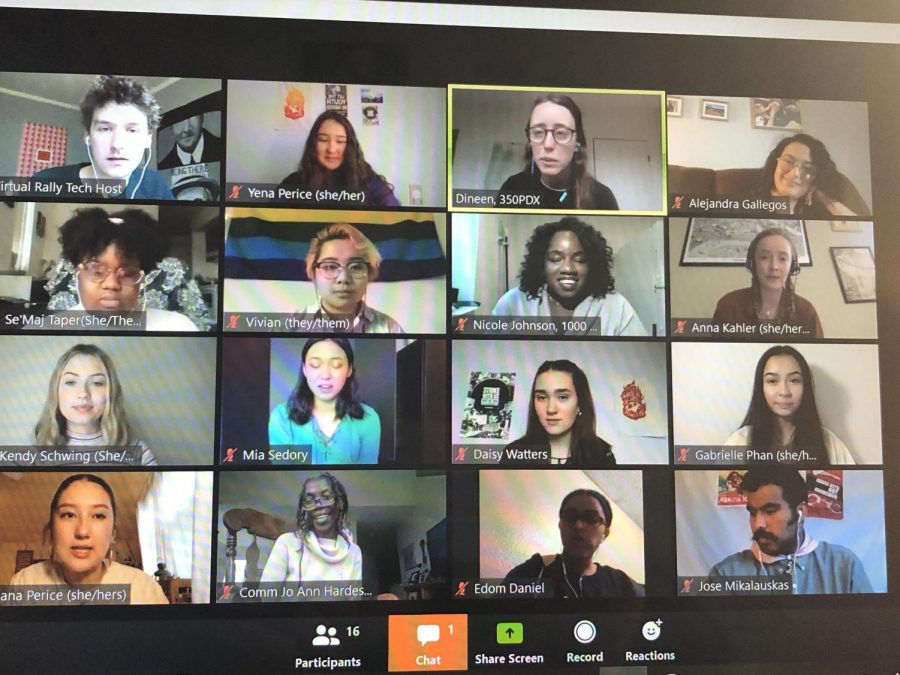 The 50th Anniversary of Earth Day was supposed to bring millions to the street across the globe to fight for the health of the climate. The first ever Earth day, 20 million lined every city as they fought for their futures and for their Earth. With covid-19 keeping stay at home measures strictly in place, this physical unity between organizers, protestors, and the Earth itself was disrupted.

“When everything went on lockdown and we had to find alternative ways to organize together, it really showed me that there are truly no limits to what we can accomplish together as a movement, even when we have to do everything online and at home,” said Cleveland junior and youth organizer Yena Perice.

An Earth Day virtual rally was led in Portland by climate activists, youth organizers, and local chapters of climate organizations a little over one month ago, on April 22nd. The work put into this rally was massive, but the outcome was equally impressive for the first ever Portland virtual rally. Over three thousand people tuned in to watch and listen to youth panels, Portland City Commissioner Jo Ann Hardesty, updates on Oregon’s green new deal, and to join in the conversation about how we achieve, as a world, an Earth that is healthy and creates an equitable living place for all its inhabitants.

“It was so inspiring to see all the speakers and comments people were leaving,” said Perice. New social distancing norms lead to new solutions, and for a mass rally organizers were challenged to find technology which could suit all their needs. The final outcome was a live stream video on Youtube which is still available for any who might have missed the Earth Day rally.

“It was something none of us had ever done before so it felt like a huge success when everything worked out,” said Cleveland junior and youth organizer Daisy Watters. This was her first time participating in this kind of mass organization, and yet she became one of the three emcees for the Earth Day rally. “Doing something so uncertain is not something I’m usually super comfortable with, but I’m proud that I gave it a shot, and it showed me that sometimes taking a chance can really have an amazing result.”

The rally was like taking one giant chance, but a chance that had to be taken. The fight for a healthy Earth does not stop during a pandemic, it simply adapts. This adaptation manifested itself in the live stream of a virtual rally, something never done before, which gave space to talk about some pressing local issues as well as a broader vision for Oregon’s Green New Deal.

The virtual rally featured a panel with OPAL’s YEJA to talk about Youth Pass, a movement to demand year round region wide free transit fare for all youth under 18. This panel was led by David Douglas student Edom Daniel, and included YEJA campaign leads and interns, members of the Multnomah Youth Commission Transit Equity and Environmental Advocacy Team, Multnomah Youth Commission members, and a community engagement manager for 1000 Friends of Oregon.

PPS is the only district region wide to provide free bus passes to its students, and many communities who live in outer Portland face limited access to the city and its opportunities. To provide a more equitable transportation system is critical for frontline workers and youth who are working to provide for their families. As Oregon reopens it will be even more critical as many people will be in financial distress as unemployment rates have already passed 20% in the United States.

“I am definitely a part of the, I guess, the group that is impacted by not having Youth Pass I guess, as like a young person of color who comes from a low income background. Personally I am heavily transit dependent,  I do not rely on my parent at all for rides, just because she’s constantly working. And so I want to be able to create a more inclusive and like a sustainable Youth Pass program for other youth in the future who don’t have to go through these experiences of feeling like they don’t have access to their city, they don’t have a right to transportation, because they can’t afford the fare,” said David Douglas junior and YEJA campaign lead Vivian Su during this panel.

Even in a progressive city such as Portland, there is not equitable access to transportation for our youth. As a PPS student I benefit from the free bus passes I receive each year, but I also know that PPS is an affluent and predominantly white district. The reality of racial segregation within Portland is visible in this struggle for transportation in districts which have greater numbers of students of color, while white districts can get access to free transportation.

I had the privilege to meet these youth organizers who planned the virtual rally while organizing alongside them, but not until hearing them talk in this event did I hear some of the underlying reasons that brought them to be organizers, brought them to this work of fighting for a more equitable future for all people. They deserve all the congratulations in the world for the work they are undertaking, and they were not alone.

Portland City Commissioner Jo Ann Hardesty attended the virtual rally, saying she was, “Totally inspired by the Youth Pass panel, and for their passion in making sure that youth transit justice is a part of this Earth Day celebration.”

Working alongside people who have planned this rally gives me so much hope for our future. Even during a pandemic, there is a response to injustice from our own generation. It was a beautiful thing to see. These youth and all the organizations and the people fighting alongside them, are the defense for this planet. The work they do is incredible, and has a huge impact on those who undertake it.

Perice says, “What I’ve come to learn from all of my work in climate activism is that a responsible definition of climate justice takes into account the social injustices that are exacerbated by a warming climate, and the historical and social responsibilities of entities that benefited and benefit from polluting and exploiting our earth. One cannot talk and act as if climate change doesn’t have any social and political repercussions. At its core, climate justice is expanding the framing of global warming as not only a physical and scientific issue, but also a matter of ethics and social inequalities.”