All Rights go to Netflix

I have never played a single game of chess in my entire life. The farthest I’ve ever been into one was my second turn where I didn’t know what to do so I gave up. The board and pieces are strangely intimidating for someone completely unaware of how to play. So with this in mind, it begs the question of how a show almost entirely about playing chess could be so interesting to someone like me. Netflix’s new original series The Queen’s Gambit answers that question with flying colors.

Based on a 1983 novel of the same title, The Queen’s Gambit follows the life of Beth Harmon as she competes in chess tournaments to become the chess world champion while struggling with alcoholism and drug addiction behind the scenes. Director Scott Frank crafts this seemingly simple story into a complex and engaging tale of discovery, loss, and persistence.

From the opening scene of the first episode, the show exudes a vintage feel that can only be found in dusty antique stores. Its 1960s backdrop gives it a uniqueness not found in many tv shows or movies made today. The retro sets featured throughout the show are not only beautifully put together and incredibly detailed but also serve the show’s narrative, keying in on important plot points like the rise of hippie culture and the cold war. Though some of the computer-generated shots of old buildings can be distracting, they do a great job making younger viewers feel comfortable in the unknown territory of the ‘60s. It somehow finds a way to transport its audience to a time where a chess tournament was just as important as a football game.

The show has a superb cast of characters that each bring their own flavor to the screen, but the star of the show is truly Anya Taylor-Joy as Beth Harmon. Beth feels like a fully-fleshed out character from the first moment you meet her. Anya Taylor-Joy is able to translate all the complexities of the character through subtle body movements and facial expressions, letting the audience really step inside the shoes of Beth Harmon. The show can oftentimes feel like a character study as we watch Beth sink to her lowest lows and rise to her highest highs. Though Beth is a character who comes with a bundle of flaws, we root for her success no matter the circumstances. Isla Johnston is also great as a young Beth discovering her greatest strengths and weaknesses as she is raised within an orphanage. The real pull of the show is Beth’s character rather than the chess she plays. What brought me back each episode was my interest in seeing what Beth would do next and if she would let her addiction take her over or if she would push through to the next match. 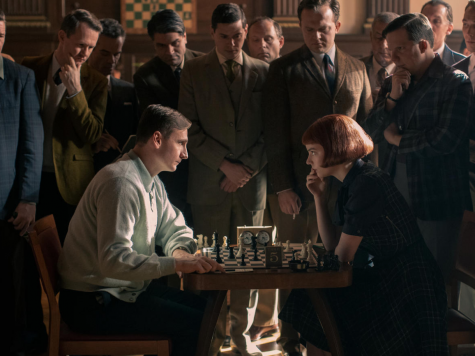 The other element of the show that really stands out is the screenplay. So many scenes in this show could have been put together in the most boring way possible, but thanks to the screenplay and the direction behind the camera, each scene feels like a meticulously crafted moment. One of my favorite scenes from earlier in the show is a scene where a young Beth secretly breaks into a drug cabinet to steal tranquilizers as audio from the 1953 biblical film The Robe plays over it. Beth gorging herself on handfuls of tranquilizers is intercut with the main characters of The Robe entering heaven as the word “Hallelujah” is sung repeatedly. A scene like this could have been made in the blandest way possible, but instead, it finds a way to create an incredibly tense scene with a twist of dark humor. The screenplay also manages to do this with its many chess scenes, making each game a white-knuckle moment even for viewers who don’t know a thing about chess, like me. You can really tell that each episode was written with thought and emotion at the forefront.

So, how do you make a show all about chess interesting to someone who’s never played? With a top-notch screenplay, skillful direction, and an amazing lead that is endlessly enjoyable to watch. Beth Harmon’s adventures through chess, alcohol, love, and drugs is something not to be missed. If you’re looking to be sucked-in by an enthralling series, look no further than The Queen’s Gambit.